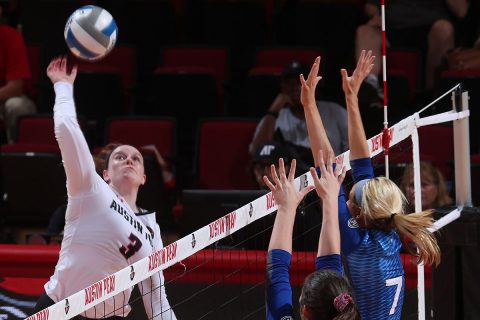 Back on the court just 16 hours and 120 miles after opening OVC play at SIU Edwardsville, Friday, Austin Peay (4-12, 2-0 OVC) showed early signs of travel lag as Eastern Illinois forced overtime in each of the first two sets.

The Govs fended off three set points in the first set to win the frame.

In the second, the Panthers returned the favor by fending off four set points, but the Govs won the final two points to take a 2-0 lead. Austin Peay pulled away in the third set, winning in wire-to-wire fashion to claim the match.

Moore opened the match with seven kills in the opening frame and finished with a match-best 17 kills and a .245 attack percentage. Jenna Panning [2] chipped in 10 kills as the Govs posted 40 kills in the three-set match.