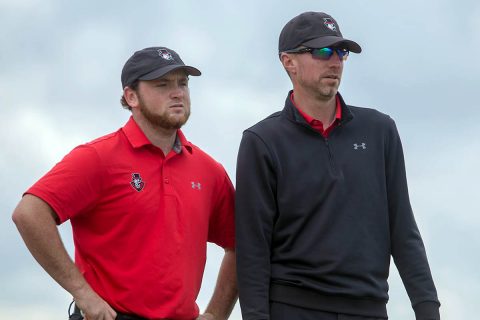 The 14-team field that will appear at the Country Club of Sapphire Valley will swell the field to 87 golfers.

Last season, the APSU Govs took seventh in this event, with Chase Korte [1] and Michael Busse [2] tying for 14th. That duo will be back in action this week, with Busse slotting in as APSU’s No. 1 and Korte the No. 4. For the Govs to earn their first team top-five in the event, that duo will be key to the Governors hopes.

Senior Austin Lancaster [3] will play as the No. 2 this week. At last week’s Derek Dolenc Invitational, Lancaster hung tough through 36 holes before a final-round 68 moved him all the way up to a team-best 13th. Similarly, freshman Tate Dickerson [4] rallied from an opening-round 78 to finish at 223, highlighted by a second-round 71.

2019 OVC Freshman of the Year Micah Knisley [5] will make his fall debut this week. It also will be his first appearance at this event; he missed the then-Hummingbird Intercollegiate last season.

Live scoring will be provided via GolfStat.com. A complete recap and stats will be available at the conclusion of each day of play at LetsGoPeay.com.