Clarksville, TN – A three-minute stretch, which saw Austin Peay State University (APSU) soccer concede a pair of goals, was the downfall for the Governors against UT Martin on a sweltering afternoon at Morgan Brothers Soccer Field.

In the 29th and 31st minute, UT Martin’s Hendrikje Baurmann was able to find the back of the net twice to give the Skyhawks a 2 goal advantage. 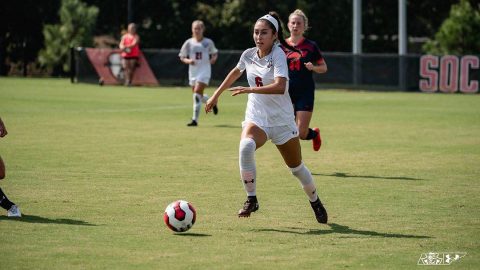 Making a change in goal at the half, sophomore Peyton Powell [1] posted a clean sheet in the second half to keep the Skyhawk lead at two, but the Governors were never able to get any traction on the offensive end, and dropped the match, 2-0.

After dropping a Friday match, it was a quick turnaround for the Governors when they hosted UT Martin at Morgan Brothers Soccer Field. UT Martin struck first when they scored during the 29th minute.

The Skyhawks added another goal almost immediately, scoring in the 31st minute, to take a two-goal advantage. The rest of the first half passed quite uneventfully, as the Govs went into the break trailing for the second straight match.

The Midland, Texas, native Celeste Espinoza [2] made her Austin Peay debut today, starting the second half and logging 19 minutes for the Governors.

On the offensive end, Claire Larose [3] led the Governors in shots and shots on goal once again. Larose leads the Govs this season with 25 shots and eight on goal. Abigail Gemza [4] and Alexandra Maslowski [5] each added another shot for the Govs today, but neither was able to find the back of the net.

Opening remarks… ” I’m really proud of the character and persistence our team shows. I say this time and time again, I am really pleased with the ‘battle for it’ attitude each of our players brings on game days.  We are not winning games yet, but we are fighting with everything we’ve got. I know those wins will come and I try to drive that home to our girls every day..

On the difference tonight… “We’re bummed about conceding two goals today. We have  talked numerous times about key moments and while we had the small victory of not allowing UT Martin to score in the first five minutes, which they have the past few games, we still conceded two within five minutes of each other in the first half.

Final thoughts… “It was a story of two halves today, I thought we struggled to have energy and intensity in the first half. The second half was so different for us, we looked like we wanted to win balls, we stepped stronger into tackles, and challenged air balls. We had a sense of urgency and desire, I was very happy with the change. A couple players stepped up today, Morgan Drawdy [7] and Gybson Roth [8] put a shift of serious work and lifted players around them.”

The Governors will hit the road for their longest Ohio Valley Conference road trip of the season when they travel to Eastern Kentucky for a 4:00pm October 4th, 2019 match against the Colonels.

After the trip to Richmond Kentucky, the Govs will travel to Tennessee Tech and Jacksonville State to conclude a three game road swing.