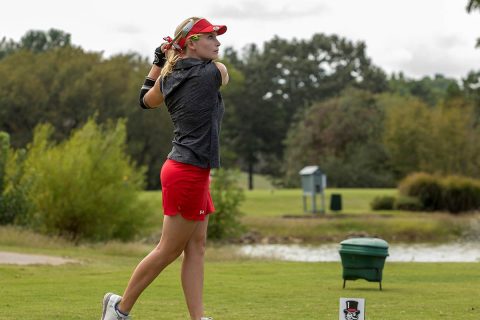 Now in its 21st year, this event has been at the Country Club for all but two years.

This year, the course has dropped below 6,000 yards after some shifting on Hole Nos. 6 and 10. Remaining a par-72 offering, the 5,965-yard track will be slightly more forgiving this year, but remains a challenging course.

Monday will kick off the event with an 8 a.m. shotgun start, followed by the opening 36 holes. Tuesday will see the same start time, with the final 18 holes up for grabs.

This year, a nine-team, 51-player event awaits the competitors this year. Joining the Govs at the Country Club will be the usual suspects of Ohio Valley Conference competitors in Belmont, Eastern Illinois and Tennessee Tech; however, the remaining programs—Evansville, IUPUI, North Alabama, Western Carolina and Valparaiso—are largely newcomers to the event, with only North Alabama visiting Clarksville since 2014.

The Governors will trot out the same five that have been in the lineup through the first two tournaments of 2019-20. Senior Meghann Stamps [1]—who finished sixth in this event as a freshman, albeit at Greystone Golf Course in Dickson Tennessee — will lead the way as the No. 1, followed by sophomores Taylor Dedmen [2] and Shelby Darnell [3] at No. 2 and No. 3. Juniors Riley Cooper [4] and Andrea Presilla [5] round out the Austin Peay State University lineup. A Clarksville native, Cooper missed last season’s event due to injury and is eager to show what she can do in her hometown.

Freshman Payton Elkins [6] will make her Austin Peay State University debut this week; the Valdosta, Georgia native is the first female golfer in Lowndes High School history to sign with a Division I program after being there since the program’s inception.

Live scoring will be provided via GolfStat.com for this event. On-course coverage can be found on Twitter via @AustinPeayWGO, and a complete recap, stats and photo gallery from each day will be available on LetsGoPeay.com.