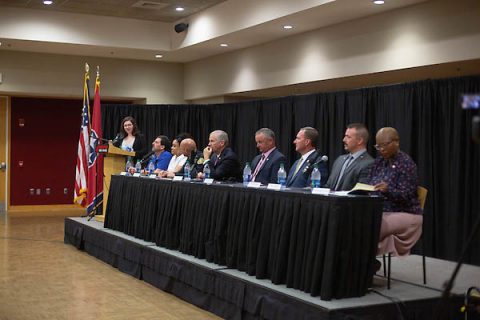 “I assumed, wrongly, that maybe they didn’t care about students, people my age,” Tarpy said. “I realized they were much more accessible than I thought they were, and they really did care about what we thought.”

“All the panelists had great answers to our questions,” Tarpy said. “They said Austin Peay State University students should care (about local politics) because we live in this community. The things they do still affect us.”

The idea for Poli-Talk originated earlier in the semester, when Tarpy’s PELP class attended a Clarksville City Council meeting and a Montgomery County Commission meeting. The Austin Peay students were among the youngest people in the room.

“There were people more my parents’ and grandparents’ age going, but no one my age,” Tarpy said. “And we can vote, so why shouldn’t we be there?”

Dr. Tim Winters, director of the APSU PELP program, challenged his sophomores to create an event that would encourage students to get involved in local government. Tarpy and Holly Abrams, fellow PELP student and co-leader, with help from the rest of the sophomore PELP class, accepted this challenge by developing a panel discussion featuring local politicians.

About 50 students attended the event, which will take place annually on the APSU campus.

In 1989, Dr. Oscar Page, former APSU president, established the PELP program to help cultivate leadership qualities in some of the University’s top students. The program accepts students from all academic areas and provides them with special classes on leadership theory. PELP students receive an annual scholarship of $3,000, which is renewable over a four-year period.

The students must maintain a cumulative collegiate GPA of at least 3.5, and they must enroll in at least 12 credit hours per semester. They must also take required PELP courses and fulfill other program requirements as outlined by the PELP director.

“It (PELP) is the most wonderful opportunity I’ve ever had in in my entire life,” Tarpy said. “We have all these cool opportunities to get involved on campus and make a difference.”