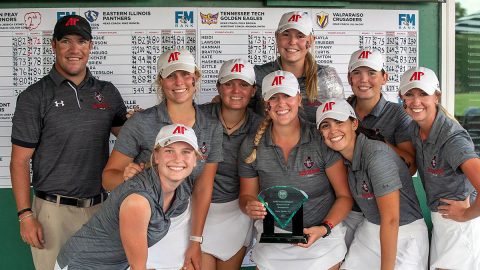 The Catamounts (914) seemed on the verge of narrowing the gap before the Govs pulled away with a late-round surge. Tennessee Tech (924) and Valparaiso (948) ensured that the top-five remained unchanged from Monday.

“A pretty impressive showing, and we probably could’ve had four in the top five if our putters had been working,” said head coach Jessica Cathey [2] following her first home tournament in charge. “Riley had a tough couple of rounds the last two tournaments, and she played the golf she was capable of playing today. She pulled through for us.”

While sophomore Taylor Dedmen’s [3] 224 (72-73-79) kept her in the top five and atop the Austin Peay State University leaderboard, Cooper’s final-round 72 was the dominant final-round for the Govs, catapulting her into an eighth-place finish with a 228 (76-80-72). For Cooper, the result is her first career top-10 finish, best single-round (72) and best 54-hole score (228) as a Gov. A career day indeed for the Clarksville High School product a stone’s throw from her alma mater.

Dedmen’s team-high 35 pars led an Austin Peay charge that saw the Govs earn a tournament-best 162 pars; she also led the Govs with seven birdies en route to a fourth-place finish.

“We played a little scared and a little not to lose today rather than being aggressive and trusting their games,” Cathey said. “We’ll work on our mental game and our putting heading into the next tournament.”

The APSU Govs will be back in action next week at the Chris Banister Classic in Glencoe, Alabama, October 7th-8th.