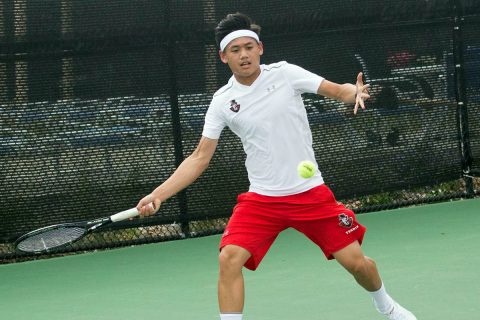 The Governors lineup consisted of two new duos; the first was juniors Jacob Lorino [1] and Christian Edison [2]. Lorino/Edison knocked off the Cumberland duo of Bagnera/Bochnia in their first match together. The second paring for the Govs featured sophomore Anton Damberg [3] and freshman Julius Gold [4]. In Gold’s first collegiate match, and their first time playing together, the pair won 6-2. Govs freshman Thiago Nogueira [5] was paired with Yannick Pfleiderer, from North Alabama, in his first match due to a lack of available Govs. Nogueira/Pfleiderer dropped their match, 6-3.

“We had some wins and losses today. Overall, our men worked hard and I am pleased with everyone’s effort. We must improve our doubles by making less unforced errors, keeping better inventory on opponent weaknesses, and by not trying to make great shots from tough positions.”