Posted By Clarksville Online News Staff On Sunday, October 6, 2019 @ 1:30 am In Technology | No Comments

Pasadena, CA – NASA’s InSight lander, which is on a mission to explore the deep interior of Mars, positioned its robotic arm this past weekend to assist the spacecraft’s self-hammering heat probe. Known as “the mole,” the probe has been unable to dig more than about 14 inches (35 centimeters) since it began burying itself into the ground on February 28th, 2019 [1].

The maneuver is in preparation for a tactic, to be tried over several weeks, called “pinning.” 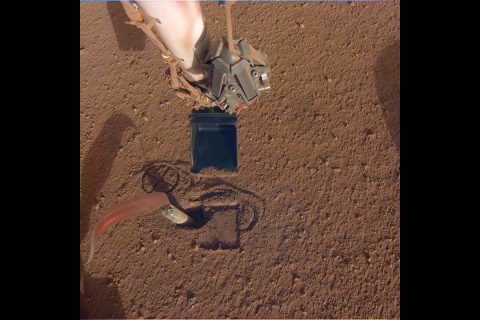 NASA InSight’s robotic arm will use its scoop to pin the spacecraft’s heat probe, or “mole,” against the wall of its hole. (NASA/JPL-Caltech)

“We’re going to try pressing the side of the scoop against the mole, pinning it to the wall of its hole,” said InSight Deputy Principal Investigator Sue Smrekar of NASA’s Jet Propulsion Laboratory in Pasadena, California. “This might increase friction enough to keep it moving forward when mole hammering resumes.”

Whether the extra pressure on the mole will compensate for the unique soil remains an unknown.

Designed to burrow as much as 16 feet (5 meters) underground to record the amount of heat escaping from the planet’s interior, the mole needs friction from surrounding soil in order to dig: Without it, recoil from the self-hammering action causes it to simply bounce in place, which is what the mission team suspects is happening now.

While JPL manages the InSight mission for NASA, the German Aerospace Center (DLR) provided the heat probe, which is part of an instrument called the Heat Flow and Physical Properties Package (HP3 [2]). Back in June, the team devised a plan [3] to help the heat probe. The mole wasn’t designed to be picked up [4] and relocated once it begins digging. Instead, the robotic arm [5] removed a support structure [6] intended to hold the mole steady as it digs into the Martian surface.

Removing the structure allowed the InSight team to get a better look at the hole that formed around the mole as it hammered. It’s possible that the mole has hit a rock, but testing by DLR suggested the issue was soil that clumps together rather than falling around the mole as it hammers. Sure enough, the arm’s camera discovered that below the surface appears to be 2 to 4 inches (5 to 10 centimeters) of duricrust, a kind of cemented soil thicker than anything encountered on other Mars missions and different from the soil the mole was designed for.

“All we know about the soil is what we can see in images InSight sends us,” said Tilman Spohn, HP3‘s principal investigator at DLR. “Since we can’t bring the soil to the mole, maybe we can bring the mole to the soil by pinning it in the hole.”

Using a scoop on the robotic arm, the team poked and pushed [7] the soil seven times over the summer in an effort to collapse the hole. No such luck. It shouldn’t take much force to collapse the hole, but the arm isn’t pushing at full strength. The team placed HP3 as far from the lander as possible so that the spacecraft’s shadow wouldn’t influence the heat probe’s temperature readings. As a result, the arm, which wasn’t intended to be used this way, has to stretch out and press at an angle, exerting much less force than if the mole were closer.

“We’re asking the arm to punch above its weight,” said Ashitey Trebi-Ollennu, the lead arm engineer at JPL. “The arm can’t push the soil the way a person can. This would be easier if it could, but that’s just not the arm we have.”

Interplanetary rescue operations aren’t new to NASA. The Mars Exploration Rover team helped save Spirit and Opportunity on more than one occasion. Coming up with workable solutions requires an extraordinary amount of patience and planning. JPL has a working replica of InSight to practice arm movements, and it has a working model of the heat probe as well.

Besides pinning, the team is also testing a technique to use the scoop in the way it was originally intended to work: scraping soil into the hole rather than trying to compress it. Both techniques might be visible to the public in raw images [9] that come down from InSight in the near future.

About the NASA InSight Lander

[4] wasn’t designed to be picked up: https://mars.nasa.gov/news/8444/common-questions-about-insights-mole/?site=insight