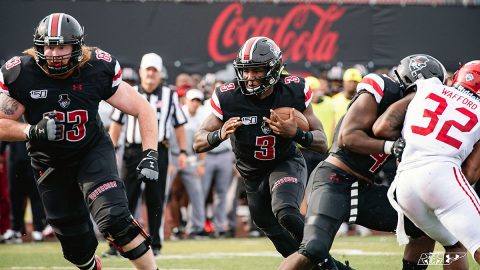 It was just two years ago when the Governors football team shocked the conference and finished in second place in the final OVC standings, behind perennial champion Jacksonville State, but took a step back last year finishing 3-5 in conference play and coming in tied for sixth place.

But this year under first-year head coach Mark Hudspeth the Govs are off to a 3-2 start overall and 1-0 in OVC play having knocked off the aforementioned five-time defending regular season champion Jacksonville State a little over a week ago, 52-33, in a game that wasn’t as close as the final margin.

A win could also make the Govs only undefeated team left in the OVC, if UT Martin, who still has to face Jacksonville State and SEMO this season, loses to a much improved Tennessee Tech squad this week in Cookeville, TN.

While the Govs offense has been playing well this season, averaging 34.2 points a game – second highest scoring average in the OVC this season – is will be the Govs defense that will truly tested this week by SEMO.

While Austin Peay enters the matchup with the best run defense in the conference – and third best in the nation – giving up just 68 yards per game to opponents this season, they will face a Southeast Missouri squad that averages 211 yards on the ground per game – trailing only Eastern Kentucky — and leads all OVC school with 17 rushing touchdowns.

If the Govs can keep the Redhawks running game in check and force SEMO to have to put the ball in the air, they are only completing 50 percent of their pass attempts this season – tying for the lowest percentage among OVC teams – along with having the fewest overall completions by any OVC team this year, coming in with 67 in 134 attempts.