Titans Look To Even Record After Home Loss

The Titans hosted the Buffalo Bills last week and suffered a 14-7 defeat. A seven-yard touchdown pass from Bills quarterback Josh Allen to wide receiver Duke Williams with less than 10 minutes remaining in the fourth quarter provided the difference.

Running back Derrick Henry scored the Titans’ lone touchdown on a one-yard run in the third quarter. He recorded his fourth game this season with at least one touchdown.

Quarterback Marcus Mariota was 13-of-22 passing for 183 yards. He did not commit a turnover and remains the NFL’s only quarterback to start every game through five weeks without throwing an interception or losing a fumble.

Meanwhile, the Titans defense collected four total sacks, giving them three performances in 2019 with four or more sacks. Their 17 sacks make up the fourth-highest total in the NFL. Safety Kevin Byard also notched his second interception of the season in the loss.

The Titans registered their third game of 2019 in which they allowed 14 or fewer points. Additionally, for only the third time since 1999 (2000 and 2008), no Titans opponent has scored more than 20 points in the first five games of a season. Allowing an average of 15.2 points per game, the Titans rank fifth in the NFL in scoring defense.

About the Denver Broncos 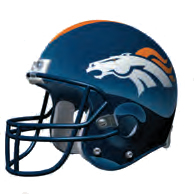 The Broncos were on the road in Los Angeles last week and earned their first win, defeating the Chargers 20-13. Running back Phillip Lindsay rushed for 114 yards and a touchdown, while the Broncos defense forced three turnovers.

Head coach Vic Fangio is in his first season with the Denver Broncos. A 40-year coaching veteran with 32 seasons of NFL experience, Fangio previously served as the Chicago Bears defensive coordinator from 2015–2018.

Broncos quarterback Joe Flacco was acquired in a trade with the Baltimore Ravens during the offseason. In 11 seasons in Baltimore, he led the Ravens to a 96-67 regular-season record and 10-5 postseason mark, and he established the organization’s career record in every major passing category.

The Broncos defense is led by ninth-year outside linebacker Von Miller. The seven-time Associated Press All-Pro leads the NFL in sacks (100) and forced fumbles (25, tied) since entering the NFL in 2011.