Clarksville, TN – The Austin Peay State University (APSU) women’s golf, without senior Meghann Stamps [1] following an injury last week, will need the youth of its roster to step up at the Lady Red Wolves Classic, which kicks off Monday at Sage Meadows Golf Club in Jonesboro, Arkansas. 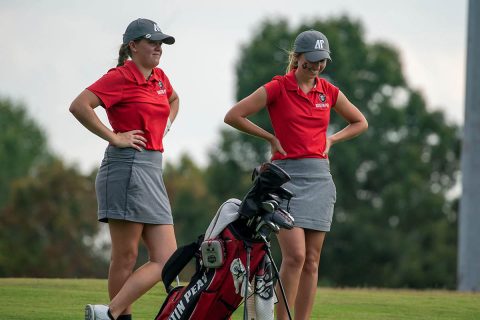 The Govs will get a look at Arkansas State’s home tournament for the first time since 2009, and they’ll face a plethora of unfamiliar foes in an unfamiliar climate. Joining the Govs and Red Wolves in Jonesboro will be competitors from Lipscomb, Samford, Little Rock, Southern Illinois, UT Arlington, Washington University and Ohio Valley Conference rival Belmont.

With two top-10s and an 11th-place finish in her last three starts, sophomore Shelby Darnell [2] looks to ride this hot streak for as long as possible; through four events, she’s the only Gov to count all 12 rounds toward the team score. She’ll slot in as the well-earned No. 1 for the week, with classmate Taylor Dedmen [3] and junior Riley Cooper [4] solidifying the upper trio.

The Govs will be paired with Samford and Little Rock, teeing off at 8:00am on Hole Nos. 5-9. Live scoring will not be available for this event; however, a complete recap will be available after each day of play at LetsGoPeay.com.