Jonesboro, AR – For the first time in 2019-20 and just the sixth time in program history, Austin Peay State University (APSU) women’s golf sits below 600 after two rounds, good for a share of fourth at the Lady Red Wolves Classic, hosted by Arkansas State at Sage Meadows Golf Club. 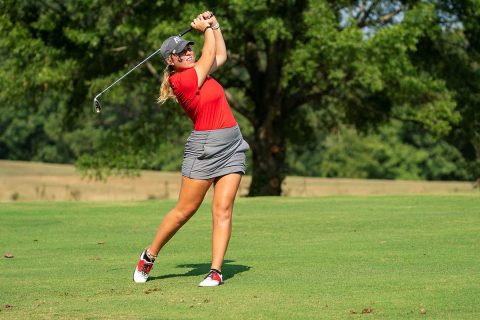 At 598 (299-299), Austin Peay State University sits tied with UT Arlington and just six shots behind Lipscomb for a top-three placing. Host Arkansas State currently has the lead at 678.

“We’re very excited about how well we played today,” said APSU head coach Jessica Cathey [1], who was a member of the first sub-600 squad back in 2013. “The girls felt like they left a few shots out there, so now we’ve got new goals to set for ourselves.

“It felt like (the first round) was a catalyst throughout the rest of round two; we played better on the back nine knowing we achieved a goal we had set for ourselves. Now, they’re all excited to try and go lower tomorrow. Each player had good shots and a few bad shots; we’re happy to be where we’re at and we’ll see where it takes us tomorrow.”

Playing without senior Meghann Stamps [2], the Govs didn’t let circumstance get the better of them; they played some of the best golf the program has ever put forth, and sophomore Taylor Dedmen [3] was a big reason why. The Plant City, Florida, native currently shares fourth with a 143 (71-72), leading a trio of Govs in the top-15. She birdied three straight holes on Nos. 15-17 in Round Two to overcome an early-round double-bogey.

Sophomore Shelby Darnell [4] was step-for-step with Dedmen in the opening round with a career-best 71; despite a second-round 76, her 147 has her just one shot outside the top-10. Junior Riley Cooper [5] rallied from an opening-round 77 to post a team-best 71 in round two, putting her one shot behind Darnell in 15th; she posted a trio of birdies on Hole Nos. 2-4 in the second round to aid her low score.

Pressed into the lineup with Stamps unavailable, freshman Payton Elkins [6] responded with 80-80 scores as Austin Peay State University’s fourth counter in the lineup. Junior Andrea Presilla [7] rounded out the lineup at 166 (85-81).

“Taylor has been a rock for us this fall and I’m proud of her for being so consistent,” Cathey said. “Riley beat her best round again. We counted Payton both rounds as a new part of the travel team, and she really came through for us.”

The APSU Govs will be paired with UT Arlington and Samford in Tuesday’s 8:00am final round, beginning on Hole Nos. 5-9.