Dickson, TN – A mammoth effort on the second-round back nine at Greystone Golf Club put the Austin Peay State University (APSU) men’s golf team in contention at the 2019 F&M Bank APSU Intercollegiate with 18 holes to play. 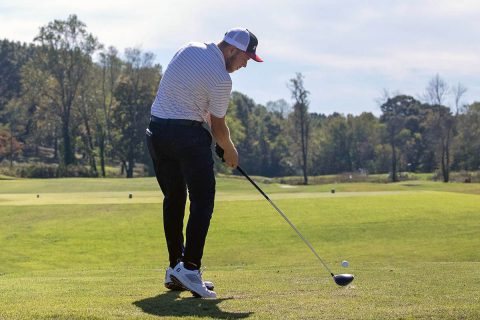 Thirty-six holes in, the Govs are at 564 (283-281), three shots behind UT Martin and one shot clear of SIU Edwardsville.

Those three, along with Missouri State (567) and Belmont (569) comprise the top five and also are the only programs under par heading into Tuesday’s final round.

Austin Peay State University’s six-under team showing on the back nine helped get the Govs in position to make a final-day run.

Back-to-back rounds in the 60s have senior Michael Busse [1] (68-69—137) in contention, one shot behind UT Martin’s Jack Story for the overall lead. Ten birdies have helped Busse, as did his 3.75 par-4 stroke average. He closed round one with four birdies on the back nine, then played a largely mistake-free second round, with just one bogey.

Freshman Tate Dickerson [2] enjoyed his first look at the home course, shooting a two-under 142 (73-69) for a share of ninth heading into the final round. He was four-under on the back-nine during round two, including one of just a dozen birdies on the par-3 at No. 11.

Final-round action begins 8:30am, Tuesday, at Greystone. The APSU Govs will be in the top pairing alongside UT Martin and SIU Edwardsville, seeking their first win in the home event since 2014.