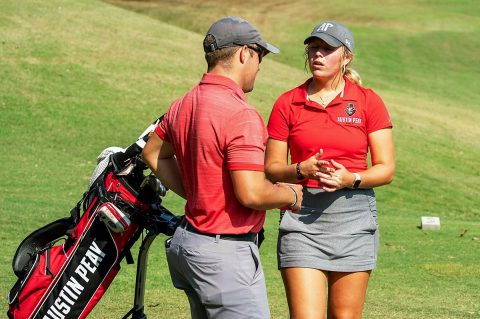 “Payton played phenomenal golf and stepped up,” said head coach Jessica Cathey [3]. “We needed a low score and she provided that for us. Very proud of how both she and Riley played.”

Sophomore Taylor Dedmen [4] was ultimately Austin Peay State University’s top finisher, tying for 14th at 221 (71-72-78). Dedmen’s back-to-back double bogey’s on No. 6 and No. 7 were a microcosm for APSU’s final day; only Elkins (who parred both holes) was able to emerge with anything better than a pair of bogeys on the on the course’s second-longest par-4 followed by a tricky par-3. With the Govs starting on Hole Nos. 5-9, it made for a difficult start to the Austin Peay State University day.

While the Govs dropped down the leaderboard on Tuesday, the team-centered markers for progress are being hit, an encouraging sign for Cathey in her first season at the helm.

“The fact of the matter is, our team tourney average has dropped each tourney aside from JSU,” she said. “The small wins will get us to a bigger win. The leaderboard may not reflect it, but we’re doing good things within the team and that will help later on. It is frustrating to move down the leaderboard. Team-wise, everyone has a good attitude right now. The atmosphere is helping with that too; our culture is great and I’m really proud of them for that.”

The APSU Govs will be back in action to close out the fall two weeks from now at the Town and Country Invitational, hosted by Tennessee State at McCabe Golf Course; Austin Peay State University is the two-time defending champion of the event.