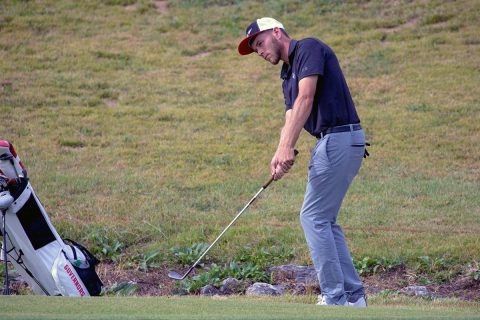 “It’s tough to be disappointed with shooting 17-under for the week,” said Austin Peay State University head coach Robbie Wilson [1]. “UT Martin hit a lot of shots to close out the tournament; you’ve got to hand it to them. We just made a few too many bogeys down the stretch. UT Martin is a good team; they’ve got a good group. Our conference as a whole is good top to bottom and we’ll have seven or eight teams who’ll challenge for those match play spots come April. It’s tough to put together three great rounds like we did and like Martin did.”

“It’s great to play close to home. We’ve got a great group of parents who travel and support us, but playing and playing well close to home is always important to us.”

Senior Michael Busse [2] battled Story for the individual title to the very last hole, ultimately settling for runner-up honors—his best career finish as a Governor. At 68-69-71, Busse’s 208 was his best 54-hole score of 2019-20, aided by a 3.80 stroke average on par-4 holes for the tournament and a team-high 13 birdies.

Busse nearly threw a scare into Story on No. 18 in the final round; two strokes behind with both players chipping from off the green, Busse’s chip hit the lip of the hole and skipped past. Had he sunk the chip, Story’s putt from 15 feet would’ve been a make or break shot.

“I was impressed with our new guys,” Wilson said. “Tate played great. We’re so excited to watch him develop. Morgan has a ton of talent and he’s a big part of this team’s future.”

The Govs are set to close out the 2019 fall schedule next week at the Kennesaw State-hosted Pinetree Intercollegiate in Kennesaw, Georgia.