Las Vegas, NV – The Nashville Predators put on a dominating performance tonight in Sin City, defeating the Las Vegas Golden Knights, 5-2 to pick up their first road win of the season.

Kyle Turris got things started at just 2:14 of the opening period on a tip-in from Ryan Ellis to give Nashville the early 1-0 lead.  Rocco Grimaldi also assisted on the goal.

Vegas came right back at 9:55 when Mark Stone snapped a shot past Pekka Rinne for the equalizer, 1-1.  Then, Reilly Smith put the Golden Knights up 2-1 with a goal at 17:23, and suddenly the momentum was in favor of the home team. 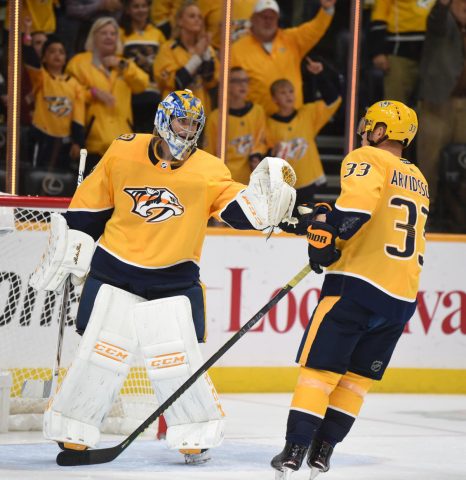 Just 44 seconds into the second period, Colton Sissons put a back hand past Vegas goalie Marc Andre Fleury and the Predators were tied once again, 2-2.

Callie Jarnkrok got his name in the books at 5:08 when his slap shot beat Fleury and the predators grabbed the lead, 3-2.  The fast paced contest was back and forth most of the night, with speed being the operative word.

Filip Forsberg gave Nashville a two goal cushion at 6:52 of the second period when his wrist shot beat Fleury on the high side and now the Predators took a 4-2 lead.

Nick Bonino would close the scoring on the night and give us our final score when his tip-in at the 4:00 minute mark would give Nashville the 5-2 final over the Golden Knights.

This is the second game of a three game road trip for the Predators who have split the first two games and will visit the Arizona Coyotes on Thursday night.

Nashville returns to the Bridgestone Arena on Saturday night to host the Florida Panthers.  Puck drops at 7pm.