Glendale, AZ – The Nashville Predators fell to the Arizona Coyotes 5-2 behind three power-play goals and a two goal performance from Phil Kessel.  Nashville lost two of the three road games on this three game western swing.

Nashville goalie Juuse Saros lost his third start of the season and the Predators were without Filip Forsberg who is out with a lower body injury.

Christian Dvorak put Arizona on the board first with a wrist shot at 6:06 of the first period for the early 1-0 lead. 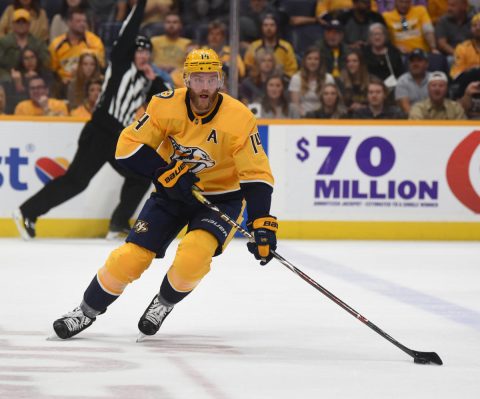 Phil Kessel then scored his first of two goals at 10:34 and the Coyotes had a 2-0 lead.  Arizona kept the pressure on the Nashville defense all night.

Into the second period, Nashville’s Dante Fabro slapped a shot over the shoulder of Coyotes goaltender Darcy Kuemper to cut the Arizona lead in half, 2-1.  Kyle Turris and Ryan Ellis assisted on the goal at 3:13 of the period.

Nashville couldn’t hold ground though as Jakob Chychrun gave the Coyotes their two goal lead again with an open net shot to make it 3-1 at 14:27.

Typically this season, the Predators have finished strong in the third period but not tonight as Phil Kessel scored his second goal of the evening at 5:43 of the final frame for the 4-1 lead.

Nick Bonino would add another goal for the Predators at 16:38 of the third to make it 4-2, but that would be all for Nashville on this night.

Carl Soderberg would give us the final score, 5-2 at 17:10 on a wrist shot to end the scoring on the night.

Nashville lost to the L.A Kings on Saturday, then beat the Las Vegas Golden Knights on Tuesday, before last night’s loss to take just one game on this road trip.

The Predators return to Bridgestone Arena on Saturday night to host the Florida Panthers at 7:00pm.