Nashville, TN – The Tennessee Titans and Los Angeles Chargers share a long and storied history. The two teams, founding members of the American Football League, have met 46 times since 1960. The Chargers lead the series 28-17-1.

Most recently, the Titans played the franchise’s first overseas game against the Chargers in London on October 21st, 2018. A touchdown pass from Marcus Mariota to tight end Luke Stocker put the Titans behind by one point with 31 seconds remaining. 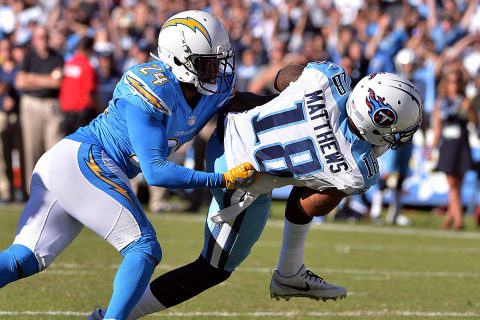 Tennessee Titans wide receiver Rishard Matthews (18) dives in the end zone for a touchdown as he is defended by San Diego Chargers cornerback Brandon Flowers (24) during the second quarter at Qualcomm Stadium on November 6th, 2016. (Orlando Ramirez-USA TODAY Sports)

The Titans elected to try a two-point conversion to take the lead, but a pass from Mariota to wide receiver Taywan Taylor was tipped by safety Adrian Phillips and fell incomplete to give the Chargers a 20-19 win.

On September 18th, 1960, the two clubs met for the Oilers’ inaugural home game at Houston’s Jeppesen Stadium. The Oilers won that matchup 38-28. In November of that same year, the Chargers won the rematch in Los Angeles, 24-21.

The AFL’s top two teams would meet once more that season—a rubber match for the first-ever AFL Championship. The Oilers were victorious at home, rejoicing in a 24-16 win that earned each member of the team an extra $1,016.42.

The following season, they met again for the AFL crown, and the Oilers again were the victors in a 10-3 final. They would clash twice more in the playoffs, first in a 17-14 Oilers win in a 1979 Divisional contest.

Following the 2007 season, the Chargers hosted the Titans in a Wild Card matchup and earned their first victory in the postseason series, winning 17-6. It was part of the Chargers’ eight-game winning streak against the Titans, lasting from 1993 until 2013.

In 2016, the Chargers’ last season in San Diego, the Titans visited Qualcomm Stadium a final time. Marcus Mariota passed for 313 yards and three touchdowns and added a rushing score, but three Titans turnovers turned into 17 points for the hosts. The Chargers prevailed by a final score
of 43-35.

The Titans and Chargers last met at Nissan Stadium on September 22nd, 2013. In one of the more dramatic finishes in the history of the venue, Jake Locker launched a 34-yard touchdown pass to Justin Hunter with 15 seconds on the clock in the fourth quarter to give the Titans a 20-17 win.

2016 Week 9 • Nov. 6, 2016 • Titans 35 at CHARGERS 43
The Chargers score the game’s first 16 points before the Titans battle back to take a 21-19 lead in the second half. Marcus Mariota passes for 313 yards and three touchdowns (two to Rishard Matthews) and adds a rushing touchdown, but he is intercepted twice and loses a fumble. The Chargers turn the three takeaways into 17 points, including a fumble return touchdown by Dwight Lowery and an interception return for a score by Brandon Flowers. Melvin Gordon rushes for 196 yards for the Chargers.

2018 Week 7 • Oct. 21, 2018 (London) • Titans 19 at CHARGERS 20
The Titans play the franchise’s first international game at Wembley Stadium. After Marcus Mariota completes a touchdown pass to Luke Stocker with 31 seconds remaining, a two-point conversion fails on an incomplete pass from Mariota to Taywan Taylor. Philip Rivers completes touchdown passes of 75 and 55 yards for the Chargers. Before halftime Mariota throws his first career interception in the red zone. Dion Lewis totals 155 scrimmage yards, while Tajaé Sharpe has a career-high 101 receiving yards.