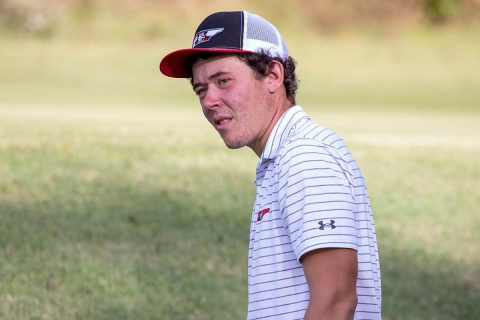 This is the second year in a row Austin Peay State University will close out the fall at this event, which is now in its eighth season. Last year, APSU placed fifth overall, with Chase Korte [1] turning in a one-under 215 to pace the Govs with a seventh-place showing.

Korte will slot in as the No. 2 in the lineup this week, with Michael Busse [2] as the No. 1 during some of the best golf of his APSU career. Last week at the F&M Bank APSU Intercollegiate, Busse battled eventual champion Jack Story of UT Martin to the final green before settling for a career-best runner-up finish.

As a team, five of Austin Peay State University’s last six rounds have come in under par, and that’s largely been helped by consistency. Four Govs have been in the lineup for all four tournaments to this point, and all four—Busse, Korte, senior Austin Lancaster [3] and freshman Tate Dickerson [4]—are scheduled to compete again this week. Dickerson was a top-10 finisher last week, while Lancaster shook off a rough opening round at Pinetree last year to shoot 147 over the final 36 holes at the 2018 event.

2019 Ohio Valley Conference Freshman of the Year Micah Knisley [5] will round out the lineup this week. His stay at Pinetree a year ago was highlighted by a second-round 71; he will make his second lineup appearance of the fall this week, after the JT Poston Invitational to start the month.

This week’s event will feature 11 teams on the 7,108-yard, par-72 course—the Govs and Owls will be joined by Belmont, Jacksonville State, Mercer, Tennessee Tech, Toledo, Troy, UIC, Western Carolina and Western Kentucky. Austin Peay State University will be paired with Troy and Western Kentucky, and are scheduled to depart off Hole No. 1 beginning at 7:00am (CT); live scoring will be provided via Golfstat.com.