Evansville, IN – Austin Peay State University (APSU) women’s basketball senior Arielle Gonzalez-Varner [1] was tabbed as a Preseason All-Ohio Valley Conference selection by the league’s coaches and communications directors, announced Tuesday at the annual OVC Basketball Media Day. The Governors were also picked to finish fourth as a team in the league’s preseason poll. 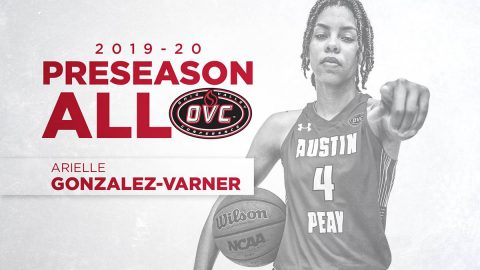 Coming off a breakout season, the 6-1 Cincinnati native was the Governors second-leading scorer and leading rebounder, averaging 12.2 points and 7.8 rebounds per game. Gonzalez-Varner led the OVC in field goal percentage, shooting 51.4% from the floor a season ago.

The senior-forward posted one of the best games in program history, scoring 32 points and pulling down 23 rebounds against Mississippi Valley State, November 19th. It is the only known 30-20 in program history, and was one of a team leading 7 double-doubles in 2018-19.

Gonzalez-Varner recorded her first 20-point performance in OVC play last season when she scored 22 points against UT Martin, January 12th. She would go on to score in double-figures in 13 of 18 conference contests, recording double-doubles in four of those games.

The Governors were picked to finish fourth in the OVC women’s basketball preseason poll. Coming off a 15-15 season, David Midlick [2]‘s squad returns nine letterwinners and four starters from 2018-19. The Govs have advanced to the OVC Tournament in all four seasons under Midlick.