Clarksville, TN – After Austin Peay State University (APSU) soccer fell behind in the first half and trailing for almost the entirety of the second half, an 85th minute goal from Anna McPhie [1] was the equalizer that would ultimately send the match to an overtime draw and secure the Govs’ spot in the Ohio Valley Conference Soccer Championship, Friday, on a rainy day at Morgan Brothers Soccer Field. 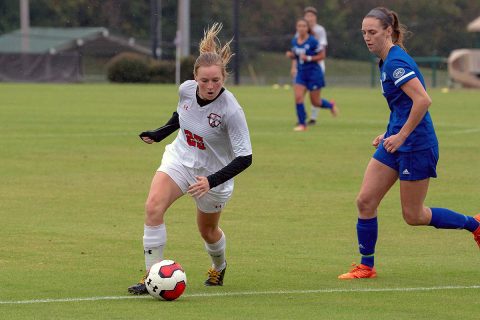 Eastern Illinois broke through first, finding the back of the net in 33rd minute, to take a 1-0 lead into halftime.

After trailing for the first 40 minutes of the second half, McPhie took a pass from Ashley Whittaker [2] and beat the Panther keeper to tie the score at one.

The match ended in a draw after two scoreless overtimes, as the Governors picked up a point and clinched their spot in the postseason.

Haylee Renick got the scoring started for Eastern Illinois in the 33rd minute, taking a cross from Itxaso Aguero and putting it past the Governors keeper.  Eastern Illinois would take the one-goal advantage into the halftime break.

The Governors came out firing in the second half, putting a barrage of shots on goal. The Govs shot 14 times in the second half, with six of those shots on frame. Claire Larose [3], Ashley Whittaker [2], Renee Semaan [4], and Morgan Drawdy [5] all put shots on net, but none of them were able to best the Panthers keeper, Sara Teteak.

In the 85th minute, McPhie took a pass from Whittaker and fired it on goal. Teteak broke to her right to make the save, but as the ball made its way through the box, it glanced off an Eastern Illinois defender and snuck just inside the left post before Teteak could recover. It was the third goal on the season for the freshman McPhie, and the second assist for Whittaker.

After the McPhie equalizer, the Govs continued their bombardment on the Panther’s net, getting off three more shots, two of which were on goal, in the final five minutes of regulation. The first ten minutes of overtime came and went with neither team putting a shot on goal.

In the second overtime, Govs senior-keeper Mary Parker Powell [6] made two critical saves after a scrum in front of the net to keep the match tied at one. The Governors didn’t get a shot off in the second overtime, but that did not matter, as the final horn sounded and the Govs picked up a single point to secure their place in the postseason.

Despite the wet field conditions, the Governors posted a season high in shots (18) and shots on goal (9). In goal, Powell posted four saves for the Govs, with the two biggest saves of the season coming in the second overtime.

After picking up a point in the draw, the worst finish the Governors could have in the final league standings is to be tied with Morehead State for the eighth and final spot in the tournament. But, since the Govs beat Morehead State, 3-0 on October 18th, they own the tiebreaker over the Eagles.

Opening Remarks
“We didn’t play a grea first half today, EIU moves well in the front half and we had some issues getting organized to deal with that defensively. Once we shifted our formation to adjust, we settled down and managed to take a bit more control of possession.”

On the offense
“In the second half we created a lot more chances, and should have put a couple in the net, but we rushed the shot or were too hopeful in our shooting. We need to be smarter in regards to that going into Sunday’s game.”

On who stepped up
“I thought a couple players that changed the game for us when they came in were Maeve Kelly [9] and Gybson Roth [10]. They both stepped in and strengthened us defensively, and created some counter situations as well.

On securing a postseason berth
“We got the point we needed to make the conference tournament and that was the goal today. Now we can focus on playing well for 90 minutes away from home on Sunday and seeing if we can better our conference standing going into the tournament.”

The APSU soccer team will wrap up the regular season with a 2:00pm match, Sunday, at Belmont. After the Govs draw with Eastern Illinois, they are tied with Belmont for seventh in the OVC with 11 points, and will have a chance to pass Belmont in the standings in the regular-season finale. Fans can enjoy Sunday’s game streamed lived on ESPN+, or as always they can follow along for scores and updates on Twitter (@AustinPeaySOCR).