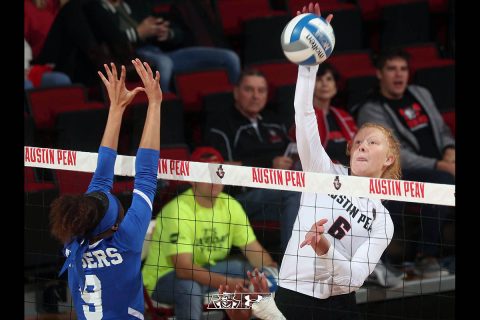 Austin Peay State University was within three points at 16-13 in the third, but against Tennessee Tech closed with a 9-3 run to claim the set. In the final frame, the Govs were again three points away from tying the set at 19-16, but six of the final nine points went to the Golden Eagles to clinch the match.

Ali Verzani led all hitters with a 21-kill outing that saw her also post four blocks. Taylor Dorsey was the big performer at the net, her nine-block night pacing the Golden Eagles 14-block effort.

Austin Peay State University volleyball will have an opportunity to rebound quickly as they will meet OVC co-leader Jacksonville State in an 11:00am, Saturday contest in Jacksonville, Alabama.