Knoxville, TN – Tennessee Lady Vols basketball hits the court for its lone exhibition game of 2019-20 on Tuesday, facing off vs. NCAA Division II school Carson-Newman at 6:02pm Central at Thompson-Boling Arena in Knoxville.

The contest will mark the seventh-straight year UT embarks on a campaign with one exhibition game on its schedule and the 16th season in a row it faces C-N in an exhibition contest. UT is 15-0 in previous preseason meetings and 14-2 all-time in regular-season match-ups vs. the Lady Eagles.

UT opens the season vs. East Tennessee at 6:00pm CT on Tuesday, November 5th, at Freedom Hall in Johnson City. 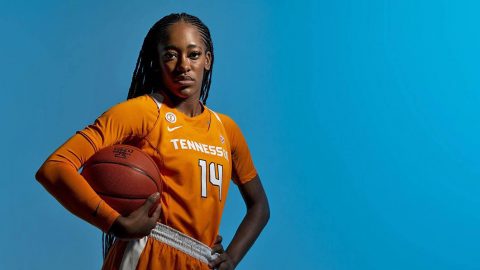 Michael Wottreng (play-by-play) and Steve Hamer (analyst) will have the call for the UT/C-N game on SECN+.

Mickey Dearstone is behind the microphone for IMG College/Lady Vol Network radio/online broadcasts for the 21st season. A link to the live audio stream can be found on each game’s Hoops Central page or the Lady Vol schedule on UTSports.com.

Including a 17-7 record on international tours, Tennessee is 65-11 overall in exhibition games.

In 15 seasons as a head coach, Harper is 285-208 and is one of only 11 coaches to lead three different women’s programs to NCAA Tournament appearances (Western Carolina/NC State/Missouri State).

She will attempt to join Jim Foster (St. Joe’s, Vanderbilt, Vanderbilt, Ohio State, Chattanooga) in becoming the only coaches to take four different women’s teams to the NCAA tourney.

Harper has rebuilt and directed teams to 12 postseason appearances (5 NCAA/7 WNIT) during her career.

Jon Harper [3] is in his 16th season as a vital member of Kellie Harper [1]‘s staff and assists with all aspects of the program. The two have worked together since they were assistants at Chattanooga from 2001-04.

The 2019-20 campaign marks Lacey Goldwire [4]‘s first as assistant coach and recruiting coordinator at UT, her eighth season as a full-time coach and her 12th year overall in the coaching profession, including stops at Oklahoma State, Morehead State, Iowa, Arkansas and now Rocky Top. She has been part of programs that have earned postseason berths in nine of 11 seasons.

Jennifer Sullivan [5] is in her first season at UT after spending the 2018-19 campaign as an assistant at Ohio State. Sullivan was an integral part of Kellie Harper [1]‘s program at Missouri State from 2013-18, serving as an assistant coach and recruiting coordinator there alongside current UT colleague Jon Harper [3]. She has 14 years of experience under her belt as an assistant.

Tennessee returns two starters and six total letterwinners from last season’s 19-13 squad that fell in the NCAA First Round.

Davis was a WBCA All-America Honorable Mention selection and All-SEC Second Team choice, while Green was named to the SEC All-Freshman Team.

Kushkituah started 11 games and was averaging 10.2 ppg. and 6.2 rpg. in 24.8 mpg. through five games before a knee injury forced her out of action for two contests and set back her progress significantly.

Burrell and Massengill, meanwhile, played in all 32 games a year ago.

Brown Gets Sixth Year From NCAA

Tennessee has a seventh player who was on the roster last season but didn’t play due to injury.

Graduate transfer Lou Brown [13], who came from Washington State and hails from Melbourne, Australia, has been granted a sixth season of eligibility due to an injury suffered prior to the 2018-19 season.

On October 17th, 2018, Brown tore the ACL in her right knee and was lost for the year. She remained a key part of the team at practice and games, always encouraging her teammates.

Brown is UT’s second-ever international player and the first from Australia.

Brown was ranked No. 2 by ProspectsNation.com among international high school recruits in 2014.

UT has the No. 9 ranked signing class in the nation, according to espnW HoopGurlz.

The group is led by 6-2 freshman guard Jordan Horston [15], ranked as the No. 2 player overall and No. 1 guard in the nation. She was the MVP of the 2019 McDonald’s All-America Game.

Also included in that rookie group are 6-5 posts Tamari Key [16] and Emily Saunders [17], ranked as a five-star by espnW HoopGurlz and a four-star by ProspectsNation.com, respectively.

Tennessee has only one player standing shorter than six-feet tall, and that is 5-8 freshman guard Jessie Rennie [18].

This year’s Lady Vols have 11 players standing 6-feet tall or higher, marking the most in program history.

The Lady Vols feature six players 6-3 or taller, marking the third time that has occurred. The only other times UT has had six on the roster standing 6-3 or taller occurred in 2005-06 and 2004-05.

Members of the media who cover SEC women’s basketball have projected the Lady Vols to finish No.  6 in the league this season.

The SEC coaches’ poll will be released on October 29th.

UT is picked fifth in the league and 24th nationally by CollegeSportsMadness.com.

The AP preseason poll is slated to be released on October 30th.

The USA TODAY coaches’ poll is scheduled to be released on October 31st.

Carson-Newman is coached by Mike Mincey, who has a 159-79 record entering his ninth season.

Junior Addison Byrd was an All-SAC Second Team honoree after tallying 12.2 ppg. and 4.6 rpg. a year ago.

Also assisting Mincey on the Carson-Newman staff is Tatum Burstrom, a Maryville native who begins her fourth year as a coach at Mossy Creek after a playing career with the Lady Eagles.

The Lady Eagles finished the 2018-19 campaign with a 22-8 overall record and a 15-5 mark in the South Atlantic Conference, good for a tie for second place.

Carson-Newman qualified for the NCAA Division II Tournament, losing to Lander, 82-79, in the region quarterfinal round. It marked the school’s ninth trip to the NCAA Tourney.

No. 11/12-ranked Tennessee cruised past Carson-Newman, 128-59, in its season-opening exhibition game on November 5th, 2018, at Thompson-Boling Arena in Knoxville.

The Lady Vols, who defeated the Lady Eagles for the 15th year in a row in preseason match-ups, had eight players register double-digit points in the win. True freshman Zaay Green [8] (28 points, 10 rebounds) posted a double-double in her college debut to lead the way.

Tennessee out-rebounded the Lady Eagles by a 72-31 margin and forced 25 turnovers on the night.

The Lady Vols had an impressive 68 points come from the bench.