Nashville, TN – A big final round vaulted the Austin Peay State University (APSU) women’s golf into a top-three finish to close the fall at the Town and Country Invitational, hosted by Tennessee State at McCabe Golf Course. 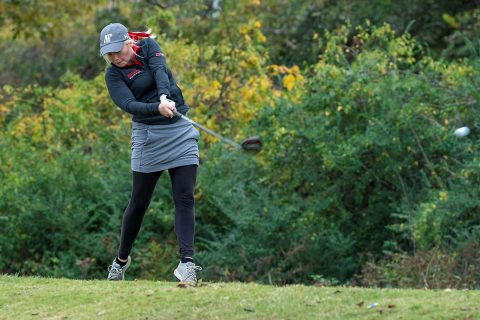 A final-round 289—Austin Peay State University’s best single round since a program-record 287 back in March at the Spring Break Shootout—pulled the Govs (295-289—584) ahead of both Cumberland (589) and Belmont (587) and to within three strokes of Lipscomb for runner-up honors. Troy (566) won the event.

“I’m extremely proud of this team and how far we’ve come since the first tournament (of the fall),” said Austin Peay State University head coach Jessica Cathey [1]. “We broke our goal yesterday, shooting 295, and we did it again today at 289. As a coach, I couldn’t ask for anything better.”

Senior Meghann Stamps [2] and sophomore Taylor Dedmen [3] were Austin Peay State University’s top finishers, tying for sixth, but it was a total team effort for the Governors on Tuesday, with all four counters in the lineup at 73 or better. Stamps carded five birdies as part of her final-round 72, while Dedmen was able to shake off some front-nine bogeys for an even-par showing on the back.

Both shot 145 for the event, with Dedmen at 72-73 and Stamps 73-72.A big final round vaulted Austin Peay State University women’s golf into a top-three finish to close the fall at the Town and Country Invitational, hosted by Tennessee State at McCabe Golf Course.

“We’re getting to play a lot more consistent golf,” Cathey said. “I don’t think Riley missed a fairway today, and that showed in her score. Payton wasn’t traveling at the start of the year, and here she is in the lineup. We’re happy with where we’re at, but we’re not content and we’re going to keep grinding.”

Next Up For APSU  Women’s Golf

The Town and Country Invitational closed out the fall session for the Austin Peay State University women’s golf team; they’ll be back in action March 1st, 2020 at the Kiawah Island Classic, hosted by the College of Charleston in Kiawah Island, South Carolina.