Clarksville, TN – The Austin Peay State University (APSU) football team will take to the road for a third straight weekend, trekking to Richmond, Kentucky to square off against Eastern Kentucky at Roy Kidd Stadium. Kickoff is scheduled for noon, Saturday, November 2nd, 2019. 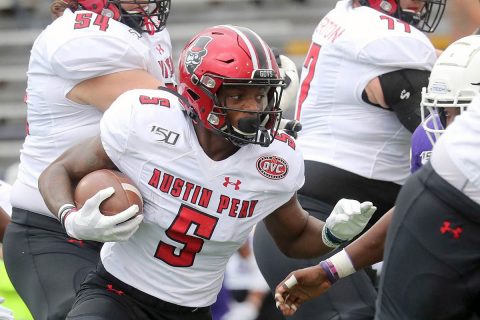 Much is on the line in this one; both the Govs and Colonels enter the contest with one loss in league play, meaning that—unless the Ohio Valley Conference continues down its path of chaos and anarchy—this would likely serve as a de facto elimination game in the league race.

Ranked 25th, the Govs have the leg up on paper but Eastern Kentucky has been hanging around near the top-25 for much of the last few weeks as well.

Saturday’s game will be broadcast via ESPN+, as will all home and Ohio Valley Conference road games with the exception of the November 16th game at Murray State, which will be on ESPN3. This is Austin Peay State University’s penultimate road contest of the 2019 regular season, with only the trip to Murray, Kentucky, remaining.

About the Eastern Kentucky Colonels

Eastern Kentucky leans on its run game. The Colonels rank as the OVC’s No. 1 run offense, with their 1,702 rushing yards aided by 300-yard outings against Valparaiso (333 yards) and Tennessee State (379).

However, EKU is 1-3 this season when rushing for fewer than 200 yards in a game. Junior running back Daryl McCleskey (103.5 ypg) is the lone OVC runner averaging more than 100 yards per game in 2019.

Eastern Kentucky boasts the OVC’s top rated pass defense, holding opponents to a 109.9 pass efficiency rating, 185.2 passing yards per game, and only eight passing touchdowns, each top marks in the league. The Colonels also have picked off nine passes – sophomore defensive back Daulson Fitzpatrick leading the effort with three picks.

Kentel Williams [1] went wild; the do-it-all back ran for 83 yards and turned in another 87 in the return game, but APSU was held under 100 yards passing and Eastern Kentucky rallied from a 13-3 halftime deficit to escape Clarksville with a 17-13 win.

Kordell Jackson [3] was a difference-maker on defense, making seven tackles, two behind the line of scrimmage, and adding a pick.

The 2008 meeting between these foes—won 13-10 by Eastern Kentucky—was the last time Austin Peay State University played an overtime contest.

Austin Peay State University has played just two games at home when nationally ranked—in 1979 against Western Kentucky and Sept. 8, 2018 against Presbyterian. A win would almost assure the Govs would enter homecoming against UT Martin ranked.

The Govs have not lost a fumble in 2019, a claim only two other FCS teams – Princeton and Hampton – can make.

Austin Peay State University remains among the nation’s Top 5 in sacks allowed, at a paltry 0.50 per game.

The Govs offense is one of four FCS teams ranked in the FCS Top 10 in both fewest fumbles lost and sacks allowed this season. The APSU Govs are one of only three FCS teams which have not lost a fumble in 2019 and are No. 2 nationally in sacks allowed per game (0.50). The other three FCS programs are Wofford (4th in fumbles lost, 1st in sacks allowed), Sacred Heart (7th & 2nd) and Florida A&M (7th & 9th).

Be sure to follow all the Austin Peay State University football action at LetsGoPeay.com and the official Facebook page of APSU Athletics. In addition, live play-by-play coverage can be found on Twitter (@GovsFB) and PeayStats.com. Live coverage from this weekend will be provided via streaming (ESPN+).