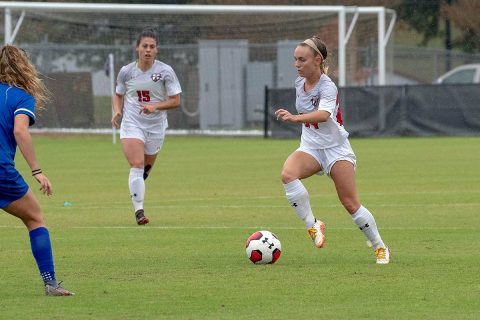 Senior keeper Mary Parker Powell [1] kept the Governors in the match, hauling in ten saves to keep a clean sheet through regulation.

In an aggressive offensive game from both sides, each time fired 10 shots on goal, and each goalkeeper made 10 saves. In the first half Powell made six saves to keep things tied up at zero. The Governors put five shots on frame in the first 45 minutes, but were never able to best the Belmont keeper.

Just like the first half, the Govs put five shots on goal in the second, with none able to find the back of the net. With the Governors offense unable to score, Powell made four more saves in the second half to keep the match tied and send it to overtime.

Overtime didn’t last long, as Julie Garst snuck a shot just under a charging Powell for the game winner.

The Governors season comes to an end in the first round of the OVC Soccer Championship for the third time in four seasons. For the second season in a row, Claire Larose [2] led the Govs in scoring with 11 points, by way of three goals and five assists.

Opening Remarks
“Obviously we are gutted about being knocked out of the tournament. We felt we deserved another game. The team worked so hard to limit Belmont’s opportunities and create plenty of our own, but we just couldn’t put it away. We’ve struggled to find goals this year and it ends up hurting us in these tight OVC games. The level of intensity and work has been top class all season from our team, we just need to continue to working on finishing and being smarter with our passing in possession.

On the seniors
“Unfortunately with the result our season ends today. Our seniors have been brilliant this year, leaders on and off the field and huge contributors – Mel, MP, Dees, and Renee, gosh we are really going to miss those girls.”

The Austin Peay State University soccer team will head into the offseason after the completion of head coach Naomi Kolarova [4]‘s second season at the helm. For offseason news and updates follow Governors soccer on Twitter (@AustinPeaySOCR).