Knoxville, TN – The Tennessee Lady Vols basketball team, which is receiving votes in the AP and USA Today Coaches Polls, opens the 2019-20 regular-season schedule on Tuesday, November 5th, 2019 as the Lady Vols take on East Tennessee at Freedom Hall in Johnson City at 6:00pm CT.

The match-up marks the regular-season debut of Kellie Harper [1] as UT’s head coach. She will attempt to become the first coach to win in her Lady Vol debut since Margaret Hutson beat MTSU at home on January 15th, 1971. The last time a Tennessee women’s basketball coach was victorious in her debut game on the road was Mabel Miller, who directed her Big Orange troops to glory against Cumberland (KY) on March 10th, 1922. 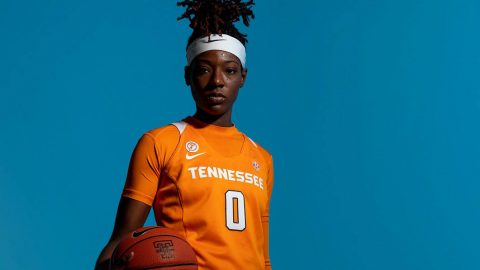 Tuesday’s contest also matches a pair of Tennessee high school basketball products in Kellie Harper [1] (Sparta/White County H.S.) and Brittney Ezell (Franklin/Franklin H.S.), who faced off in the SEC at Tennessee and Alabama, respectively, between 1995 and 1998. Ezell finished her college career in 1998, a year ahead of Harper.

UT will return to Knoxville to host Central Arkansas in the home opener on Thursday at 6:00pm ETSU, meanwhile, will play at Liberty on Friday at 4:00pm.

TV or live stream broadcast info. for the contest will be announced soon.

Mickey Dearstone is behind the microphone for IMG College/Lady Vol Network radio/online broadcasts for the 21st season. A link to the live audio stream can be found on each game’s Hoops Central page or the Lady Vol schedule on UTSports.com.

The Tennessee women are 245-61-1 all-time vs. four-year college teams from the Volunteer State

UT was 3-1 vs. teams from the state of Tennessee last season, beating ETSU and Belmont at home and Vanderbilt on the road before losing to VU at home.

UT has won its last six season openers and 18 of its last 19.

Tennessee has a 38-7 record in its first road game of the season and 42-3 all-time in its first home contest of the year.

UT has won four straight while playing the team’s first road game of a season.

In 15 seasons as a head coach, Harper is 285-208 and is one of only 11 coaches to lead three different women’s programs to NCAA Tournament appearances (Western Carolina/NC State/Missouri State).

She will attempt to join Jim Foster (St. Joe’s, Vanderbilt, Vanderbilt, Ohio State, Chattanooga) in becoming the only coaches to take four different women’s teams to the NCAA tourney.

Harper has rebuilt and directed teams to 12 postseason appearances (5 NCAA/7 WNIT) in her career.

Kellie Harper [1] is 4-0 while coaching a Power 5 school (NC State) in season openers.

Members of the media who cover SEC women’s basketball have projected the Lady Vols to finish No. 6 in the league this season, while the coaches have UT slotted at No. 7.

Tennessee is receiving votes in both the AP Poll (31st) and USA Today Coaches Poll (34th) this week.

UT is ranked No. 23 nationally by HerHoopsStats, No. 24 by CollegeSportsMadness.com and No. 25 by espnW.

Junior wing Rennia Davis [4] is a member of the 20-player Cheryl Miller Award Watch List. She was a semifinal finalist a year ago.

She was a second-team selection on the SEC Media Preseason squad.

Last season, Davis was an All-SEC Second Team choice by both the media and coaches.

The story said “Nobody in Jacksonville made a bigger impact on the court this decade than Davis.”

Davis played at Ribault High School and tallied 2,304 points and 1,043 rebounds during her career.

The Bucs are led by head coach Brittney Ezell, who is in her seventh season at the helm. She enters the year at 92-95 during her time in Johnson City and is 212-208 beginning her 14th season as a head coach.

ETSU returns nine players, including two starters,  and welcomes six newcomers to the roster for 2019-20.

Haynes-Overton is poised to become the 24th Buc to score 1,000 points in a career. She enters the 2019-20 campaign just 45 points shy of that milestone.

The Bucs typically play their games at 3,500-seat Brooks Gym on campus, but the school has moved the contest to 6,149-seat Freedom Hall, where the ETSU men’s team plays its home games.

The last time ETSU hosted the Lady Vols, 6,072 fans filed into the ETSU Minidome to see a Volunteer State showcase of women’s hoops.

Last Season at a Glance from the Bucs

ETSU finished the 2018-19 season with a 10-21 overall record and an 8-6 mark in the Southern Conference, good for a tie for third in the league.

After opening 0-8 and standing 2-15 through 17 contests, the Buccaneers won eight of their last 14, with three of their losses coming in overtime.

Senior Cheridene Green [6] (12 points) and sophomore Rennia Davis [4] (11 points and seven rebounds) joined Jackson as double-digit scorers for the Lady Vols, who bounced back from a loss to No. 8/9 Stanford.

Jackson notched 21 of her 23 points from beyond the arc on 7-of-12 shooting from deep, tying for the fourth-most treys made by a Lady Vol in a single game.

Tennessee held the Buccaneers to 31-percent shooting on the night and won the rebounding battle by a 50-33 margin.