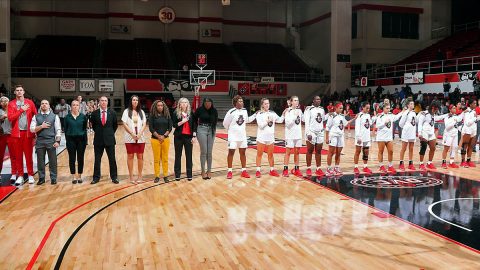 The matchup with Kentucky Wesleyan is one of two home contests the Governors will play in the opening week of college basketball, as Christian Brothers will make the trip to the Dunn Center for a 7:00pm, Friday night game.

After the two-game home stand to kick-off the season, the Govs will make trips to Illinois (November 13th) and Mississippi Valley State (November 18th) before returning home for a 7:00pm, November 21st matchup against Evansville.

About the Kentucky Wesleyan Panthers

Kentucky Wesleyan was the Great Midwest Athletic Conference runner-up in the regular season and tournament in 2018-19. The Panthers qualified for the NCAA Division II Tournament, where they lost in the first round to No. 1 seed Drury, 88-57.

The Panthers are coached by husband and wife duo, co-head coaches Caleb and Nicole Nieman. The Nieman’s have compiled a 146-79 record over eight seasons together at the helm of Kentucky Wesleyan women’s hoops.

Kentucky Wesleyan has already given one Division I program a scare this season, as they entered the fourth quarter leading Western Kentucky, 53-51. Western Kentucky outscored the Panthers 21-7 in the final ten minutes to secure the win, but the Panthers still gave the Hilltoppers all they could handle in their first exhibition.

This is the first ever meeting between the Governors and the Panthers of Kentucky Wesleyan.

The Governors have won back-to-back home openers against Christian Brothers, but have dropped back-to-back season openers on the road. The last time the Govs won a season opener was November 11th, 2011, when they beat Southern Illinois, 76-70, in the Dunn Center.

The Govs 16 made three-pointers in the exhibition against Tennessee Wesleyan would have set the team record for made three’s in a single game had it been the regular season.

Eight of 13 Govs to take the court against Tennessee Wesleyan recorded a steal, with Brianah Ferby [2] leading the way with four of the teams 16 takeaways. The Governors defense also forced 25 Bulldogs turnovers, which led to 36 points going the other way.

In the fourth quarter against Tennessee Wesleyan, the Governors held the Bulldogs to a single point, not allowing a made field goal. Kelen Kenol [3] blocked two shots in the defensive effort that came within one point of pitching a fourth quarter shutout.

In August 2019, Austin Peay State University (APSU) completed the largest on-campus LED light bulb installation to date in the Winfield Dunn Center. APSU was awarded a Clean Tennessee Energy Grant (CTEG) from the Tennessee Department of Environmental Conservation (TDEC) in the amount of $200,000. APSU matched this amount from the Sustainable Campus Fee (SCF), a student fee of $10.00 per semester for sustainable improvements.

On November 5th, local utilities including CDE, CEMC, and Clarksville Gas & Water, will host booths in the lobby to educate on how residents and students can be more sustainable and energy-efficient. Also, the first 500 patrons will get a reusable aluminum water bottle courtesy of the Sustainable Campus Fee.

Governors Courtside Seating returns for the 2019-20 season. Fans can contact the APSU Athletics Ticket Office for courtside seating availability and pricing. The VIPeay Hoops Experience, available to Black Tie Monocle Society members and above, also returns for 2019-20 after a successful debut last season. For more information on joining the Governors in the Dunn Center this winter, to secure season tickets or to become involved with the Monocle Society, call 931.221.PEAY.

Check back at LetsGoPeay.com and on Austin Peay’s Official Athletics Facebook page often for up-to-date news about all Governor athletics, as well as the Governor women’s basketball Twitter page (@AustinPeayWBB). Live stats will be available during the game at PeayStats.com, and all home games and Ohio Valley Conference games can be viewed on the ESPN+ app.