Clarksville, TN – After a record-breaking performance in the season opener, Austin Peay State University (APSU) women’s basketball is set to welcome Christian Brothers for a 7:00pm, Friday, November 8th tilt in the Dunn Center as the Governors wrap up a quick two-game home stand to open the season. 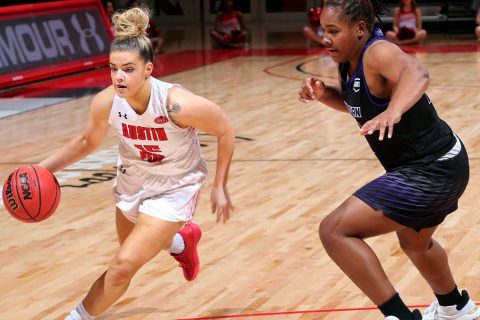 The Governors got the season started, Tuesday, when they knocked off Kentucky Wesleyan in the Dunn, 103-70.

After the Friday night matchup with Christian Brothers, the Govs will hit the road for the first time this season, making a trip to the Illinois to take on the Fighting Illini in the State Farm Center.

About the Christian Brothers Lady Buccaneers

Under first-year head coach Jessie Carmack, the Lady Buccaneers return only four players from their 2018-19 roster, but they do return their leading scorer. Brynne Lytle averaged 16.8 points and 4.8 rebounds per game. Lytle is also the top returning three-point threat for Christian Brothers, last year she knocked down 51 triples, and shot 35.7% from deep.

Christian Brothers got their season underway with an exhibition against Memphis last week. The Lady Bucs were able to stay in the game, but ended up falling, 71-61. Lytle led the way for the Lady Bucs, scoring 29-points and connecting three times from three-point range. Lauren Taylor also posted 8 points and 11 rebounds; she is one of the four returning players.

After winning the season-opener against Kentucky Wesleyan, the Govs are looking to get off to their first 2-0 start since the beginning of the 2011-12 season.

Tahanee Bennell [4] and Shay-Lee Kirby [5] each scored 21 points in the opener against Kentucky Wesleyan, it was the first time two Govs have scored 20+ points in the same game since Brianne Alexander [6] and Brianah Ferby [7] did it at Belmont, January 1st, 2018.

The Governors 68 points in the first half against Kentucky Wesleyan was the first time since December 12th, 1999, that the Govs have posted 60+ points in a single half.

For more information on joining the Governors in the Dunn Center this winter, to secure season tickets or to become involved with the Monocle Society, call 931.221.PEAY.

Check back at LetsGoPeay.com and on Austin Peay State University’s Official Athletics Facebook page often for up-to-date news about all Governor athletics, as well as the Governor women’s basketball Twitter page (@AustinPeayWBB). Live stats will be available during the game at PeayStats.com, and all home games and Ohio Valley Conference games can be viewed on the ESPN+ app.