After opening with two of its first three games on the road, Tennessee takes up residence on Rocky Top for a six-game home stand. After facing TSU, the Lady Vols welcome Stetson (November 19th), Arkansas-Pine Bluff (November 26th), Air Force (December 1st), No. 22/15 Texas (December 8th) and Colorado State (December 11th) to The Summitt. The Air Force game is UT’s Salute to Service game, while the Texas match-up is part of the Big 12/SEC Challenge. 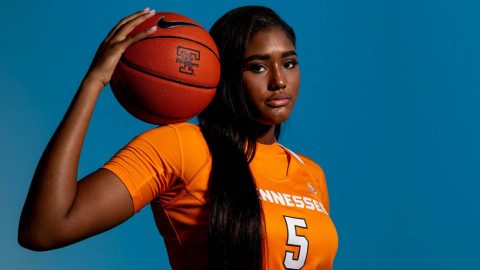 The meeting with Tennessee State is the sixth between the programs, with the first occasion occurring in 1986 but the last three match-ups happening between 2013 and 2016. The Lady Vols hold a 5-0 advantage in the series.

Tennessee enters on the heels of a 74-63 road victory over No. 15/14 Notre Dame that was televised by ESPN2 on Monday night. UT had previously toppled East Tennessee and Central Arkansas.

Thursday night’s game will be streamed live on SECN+ with Roger Hoover (PxP), Madison Blevins (Analyst) and Kasey Funderburg [1] (Report) on the call.

Tickets are available at AllVols.com [2].

It’s Dollar Dog Night on Thursday. Hot dogs are just $1.00 from the time gates open until tip-off with a voucher.

Participate in “High-5 the Lady Vols.” Kids 12 & younger can pick up a wristband at the Fan HQ table on the concourse to participate in the pregame High-5 tunnel. Wristbands are limited. To purchase discounted group tickets and reserve wristbands for your team, please call 865.946.7000.

Davis, a 6-foot-2 junior from Jacksonville, FL, also pulled down 10 boards to record her second double-double of the season and the 20th of her career.

Freshmen Jordan Horston [5] and Tamari Key [6] were also in double digits for UT with 12 and 11 points, respectively, while Jazmine Massengill [7] narrowly missed a double-double, pulling down a team-high 13 rebounds and dishing out nine assists to set new career highs in both categories.

Notre Dame (2-1) was led by Destinee Walker, who finished with 18 points. Sam Brunelle pitched in 16.

Notes From The Big Win

Setting The Record Straight on Beating Ranked Opponents
The win over Notre Dame was the first ranked opponent Tennessee had beaten since December 9th of last year when UT, then ranked No. 9, knocked off No. 12 Texas on the road. The last time an unranked UT team beat a ranked opponent was during the 2016-17 season, when the Lady Vols defeated No. 3/2 Mississippi State in Starkville in the regular season finale, 82-64. In that same season, unranked UT toppled a sixth-ranked Notre Dame squad in Knoxville, 71-69, January 16th, 2017.

Jaz Doing Work
Sophomore Jazmine Massengill [7] dished out a career-high nine assists on offense while also leading UT in rebounds with a team-high 13. While not setting another career high, she also led the team in blocked shots with four.

“Re” Making It Rain
Junior Rennia Davis [4] poured in a career-high five 3-pointers en route to tying her career high of 33 points. She shot a scorching 60 percent from the floor, including 55.6 percent from behind the arc.

Davis Moving On Up
With 33 points and 10 rebounds, David recorded her 20th career double-double to tie for 16th all-time at UT. Other Lady Vols with 20 include Dana Johnson, Debbie Groover and Cindy Noble.

Cleaning The Glass
UT dominated the boards at Notre Dame, out-rebounding the Fighting Irish 55-28. UT is averaging 52.7 rebounds per game through three contests while holding opponents to an average of 35.0 for a margin of +17.7.

Big-Time Blockers
Tennessee combined for 12 blocked shots against Notre Dame, tying for fourth all-time in shots blocked in a single game. UT is averaging 9.7 per contest.

Tennessee has opened a season 3-0 for the seventh straight season and will try to go 4-0 for the third year in a row.

UT’s highest total point quarters have been the first (60) and third (63), while the second (36) and fourth (38) have been the team’s best defensively.

The Lady Vols have won the rebounding battle in all three games and have a +17.7 margin vs. opponents.

Six players currently are averaging at least five rebounds per game, led by Rennia Davis [4] at 8.3 and Tamari Key [6] at 7.3, and six different players have led the squad in rebounds during the first three games.

The Big Orange have been big on swatting shots, averaging 9.7 blocks per contest. Tamari Key [6] averages 3.7 per game.

UT is allowing only 55.7 points per game and 31 percent shooting from the field.

Tennessee owns a 5-0 record vs. Tennessee State, with all of those contests taking place in Knoxville.

This will mark the first time that neither team is ranked in the series.

The Lady Tigers are members of the Ohio Valley Conference, and UT has a 56-21 all-time record vs. that league.

UT has averaged 99.0 points in the series vs. the Lady Tigers, tallying a low total of 86 in the most recent meeting between these in-state foes in 2016.

The Lady Vols have allowed Tennessee State to score an average of 47.8 points per game in five meetings, including a low total of 36 the last time these schools faced off.

That’s an average victory margin of +51.2 for the Lady Vols.

There are six players from the Volunteer State on the rosters of the teams, including Knoxville product Jaiden McCoy [11] and Chattanooga native Jazmine Massengill [7] for Tennessee.

Tennessee State has four in-state players on its roster, including Takya Bennett and Andreana Wrister (Memphis), and Amber Appiah-Kubi and Akiya Harris (Nashville).

Teresa Phillips, mother of former Tennessee football player and current member of the NFL’s New York Jets Kyle Phillips, is the athletics director at Tennessee State. She has held that position since April of 2002.

Tennessee State returned two starters and five other letterwinners from a year ago, when the Lady Tigers were 5-25 overall and 5-13 in the Ohio Valley Conference, good for 11th place.

Taylor Roberts, a 5-foot-11 junior guard is TSU’s top statistical returnee, averaging 12.5 ppg. and 3.6 rpg. a year ago. She came off the bench as a sophomore and was the team’s second-leading scorer.

TSU is led by third-year coach Jessica Kern, who is 6-25 with the Lady Tigers and 73-131 in her eight-year coaching career. She is a 2002 graduate of Penn State.

The Tennessee State University women’s basketball team opened the 2019-20 slate with an 83-65 victory over Wilberforce on November 8th in the Gentry Center in Nashville.

Tennessee State opened its season with a win for the first time since the 2012-13 season.

TSU out-rebounded WU, 48-37, and forced the Bulldogs into 30 turnovers.

A strong defensive outing by Tennessee (4-2) helped the Lady Vols roll past the Lady Tigers (1-5) in front of a home crowd of 7,845. TSU was held to 20 percent (13-of-65) shooting on the night and no Tiger reached double digits in scoring. UT finished with 14 steals and 10 blocks in the game.