Nashville, TN – The struggles of the Nashville Predators continued tonight as the visiting Chicago Blackhawks extracted a bit of revenge with a 7-2 beat down of the Predators.

Struggles in net for Nashville continue as Pekka Rinne yielded 4 goals by the second period and was pulled for Juuse Saros who didn’t fare much better, giving up three goals before the night was done.

Rinne had gotten off to an 8-0-2 start to the season but has had trouble stopping shots since the recent road trip.  Saros hasn’t performed much better in what was expected to be a break-out season for him. 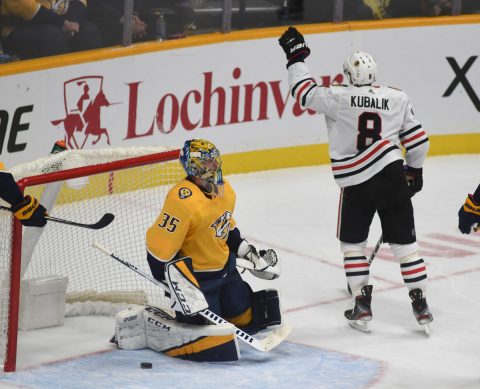 Nashville returned home from a horrendous road drip, losing three out of four games, including an embarrassing 9-4 loss to the Colorado Avalanche.  The nine goals were the most suffered by this franchise in their history.

Nashville hit the ice in the first period dominating the play and constantly on the attack.  The fired 12 shots on goal in the opening frame and 14 in the second period only to be stifled by Blackhawks goalie, Robin Lehner who was clearly the best player on the ice tonight.

Chicago goals in the first period from Erik Gustafsson and Dominik Kubalik gave the Blackhawks the 2-0 first period lead.

Not much changed in the second period as Brent Seabrook and David Kempf gave Chicago the 4-0 lead after two periods.

The only markers for the Predators came from their Captain, Roman Josi, scoring twice in the third, but Chicago continued to pour it on with three more goals for the final tally, 7-2.

The Predators will try to right the ship on Tuesday night when the Winnipeg Jets visit the Bridgestone Arena.  Puck drops at 7:00pm.