Clarksville, TN – The Austin Peay State University (APSU) men’s basketball team will make the brief trek down Interstate 24 and on to West End Avenue in Nashville Tennessee to take on Vanderbilt in a 7:00pm, Wednesday, November 20th tip at Memorial Gymnasium. 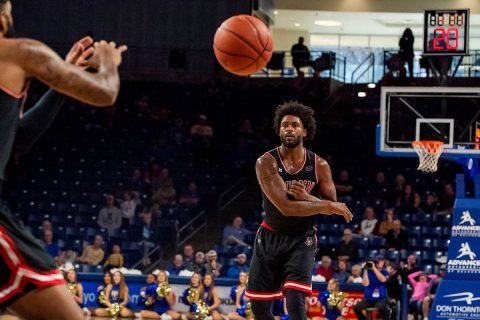 The Govs and Commodores renew acquaintances after taking last season off in a rivalry which dates back to 1938.

Much has changed for the Commodores, who feature a new head coach but the same unique gym configuration with the benches at each baseline and the same bombs-away mentality from beyond the arc.

The Govs don’t necessarily need to broach Vanderbilt’s 40-percent mark from three-point land, but they’ll have to improve on their 25-percent mark through the season’s first three games if they plan to challenge the Commodores on the road.

This is the final game of a three-game early-season road trip that took the Govs to Western Kentucky and Tulsa. Austin Peay State University finally returns from the road for a 7:00pm, Saturday, contest against Southeastern Louisiana.

Following the two-year tenure of Bryce Drew, Vanderbilt turned over the reins to two-time NBA All-Star Jerry Stackhouse in an attempt to get back above .500 for the first time since the 2016-17 season.

The young Commodores have just two seniors on the roster and have experienced bumps along the way early, dropping an overtime contest at Richmond last week after being challenged by both Texas A&M Corpus Christi and Southeast Missouri, the latter of whom led at halftime against the Commodores.

But Vanderbilt can score in bunches, and mostly on the strength of Aaron Nesmith (26.7 ppg) and Saben Lee (20.0 ppg); no other Division I program can boast two 20-point scorers in the lineup. And while the national average for three-point shooting has dipped to 33.6 percent compared to 34.5 percent last year, Vanderbilt has held steady at 40.7 percent from deep in the early part of 2019-20.

Last Time Out Against Vanderbilt

In Austin Peay head coach Matt Figger [1]‘s debut appearance on the Governor sideline (or baseline, as is the case in Memorial Gym), the Govs held Vanderbilt to 39 percent shooting in the second half and got a vision of things to come from Terry Taylor [2], who led all scorers with 15 points, but the Commodores fended off the Govs in a 73-54 decision.

A win would be Austin Peay State University’s first against an SEC foe since toppling Tennessee, December 10th, 2012.

Vanderbilt boasts an .887 winning percentage at Memorial Gymnasium against non-conference opponents since 1990; however, Vanderbilt has suffered six non-conference losses at home since 2016.

Four Govs—Taylor, Antwuan Butler [4], Carlos Paez [5] and Jordyn Adams [6]—are among the league’s top-15 in steals per game.

The Govs are plus-33 with Adams, plus-20 with Alec Woodard [7] and plus-17 with Paez on the court this season.

A win would be Austin Peay’s first in Nashville since March 5th, 2016—the day the Governors toppled UT Martin to win the 2016 Ohio Valley Conference Championship as an eight-seed and earn an NCAA Tournament bid.

For more information on joining the Governors in the Dunn Center this winter, to secure season tickets or to become involved with the Monocle Society, call 931.221.PEAY.

Check back at LetsGoPeay.com and on Austin Peay’s Official Athletics Facebook page often for up-to-date news about all Governor athletics, as well as the Governor men’s basketball Twitter page (@AustinPeayMBB).

Live stats will be available during the game at PeayStats.com, and all home games and Ohio Valley Conference games can be viewed on the ESPN+ app.