Clarksville, TN – For the first time since 1977, the Austin Peay State University (APSU) football team is the class of the Ohio Valley Conference.

The word ‘incredible’ gets thrown around a lot, but this is nothing short of incredible. 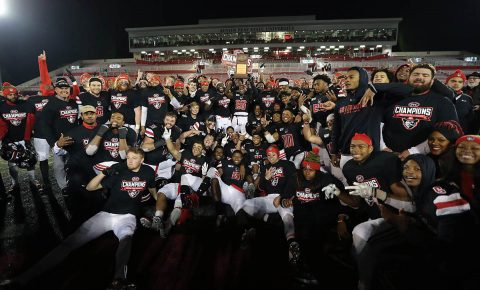 It’s not just that Austin Peay State University’s football team were doormats of the league for years–they were cellar-dwellers for decades at a time, the perennial last-place choice at league media day year-in and year-out.

Entire classes of players came and went without winning nine games, which these APSU Govs just did for the first time in program history.

It is a new day. And despite the coolness and the precipitation in Clarksville tonight, it is glorious. The Govs are OVC champions.

Austin Peay State University got on the board first; after pinning Eastern Illinois deep and forcing a punt, the Govs took over and march 61 yards in less than four minutes. The first scoring drive featured a healthy dose of JaVaughn Craig [1] Rivers and Baniko Harley [2]; first was a 16-yard hookup to move the Govs into Panther territory, then a clutch 13-yard scramble by the senior quarterback on fourth down. Finally, Craig Rivers hit Harley from 13 yards out to get the Govs on the board for the first time.

Just when it looked as though the Govs were going to have the game in hand, disaster struck. After leading Austin Peay into the Eastern Illinois red zone, Craig Rivers lofted a pass toward DeAngelo Wilson [3] but led him too far and wound up in the hands of J.J. Ross. The Panthers would march 75 yards, with Darshon McCullough going the last 47 himself on the second quarter’s first snap to tie the game.

The Govs needed less than two minutes to answer. Craig Rivers hit Harley for gains of 30 and 39 yards to get the Govs inside the EIU 10, then took it the last five himself for the score, his season’s seventh on the ground.

When the offense stalled or the defense simply needed to catch its breath, Craig Rivers–formerly doing business as JaVaughn Craig [1] before adding Rivers to his last name this week in honor of his stepfather–was the man the Govs turned to.

It’s a microcosm of the season, really; way back in week two, when Jeremiah Oatsvall [4] went down and things looked dire, it was Craig Rivers emerging from the proverbial phone booth, ready to be Superman, that helped save the Govs season.

Late in the first half, after Austin Peay State University forced a punt with 2:30 to play, the signal-caller engineered a four-play scoring drive that saw him Prince Momodu [6] for 14 yards and Gorel Soumare [7] for 12 before running the final 19 on his own to send the Govs into the break with a 21-7 lead.

When another Craig Rivers-to-Harley toss, this from nine yards out, made the score 28-7, that was the build to crescendo. When the APSU Govs stopped the ensuing Eastern Illinois drive on downs at midfield, taking over with 2:30 to play in the third and holding a three-score lead, that was the moment reality set in.

The APSU Govs were gonna do this. They were going to be Ohio Valley Conference Champions and go to the FCS playoffs.

Just because we hadn’t gotten to mention him yet, Craig Rivers hit DeAngelo Wilson [3] for a 40-yard touchdown early in the fourth quarter, but by that point, it was over. There was too much momentum. This program had come too far to relinquish that kind of lead. The universe is simply not that cruel.

The players and coaches deserve all the credit, here. In modern FCS football history, joining up with Austin Peay State University football had never been a cause celebre; it was likely to lead to more questions than answers. The past must be acknowledged; their struggle helped lead to this incredible moment we all got to witness Saturday night.

That era had ended a while ago for those in the know. In practicality if not necessarily in record, it ended the second this senior class, with program-changers like Craig Rivers, Kentel Williams [8], Trent Taylor [9] and Juantarius Bryant [10] in the fold, elected to come to Clarksville. That perception ended among our league brethren when the Govs won eight games and the first of three straight Sgt. York Trophy’s in 2017.

Tonight, Austin Peay changed a nation’s mind. Twenty-four teams get to vie for the FCS title. For the first time ever, Austin Peay State University will be one of them.

The clock has just hit zero as I type this from the Fortera Stadium press box. The scene on the field is unlike any I could ever conceive of, before we all learned to hope and before this program was raised from irrelevance. Players deliriously hugging. Coaches slipping on championship tees. “OVC! OVC! OVC!” chants spontaneously breaking out all over the place. It is a lovefest, with players and administrators, coaches and fans commingling as they celebrate.

It’s just the beginning. Sunday at 11:00am we’re hosting a watch party in the Dunn Center. It’s where APSU football will find out its opponent for the opening round of the FCS playoffs.

What a sentence. What a day. What an incredible rise for the Govs.