Thomson, affectionately known as “Bastogne 6”, and his wife Erin, served the division with distinction for 2 years.

“Over the past 2 years on this journey one word comes to mind,” said Thomson. “Gratitude.” 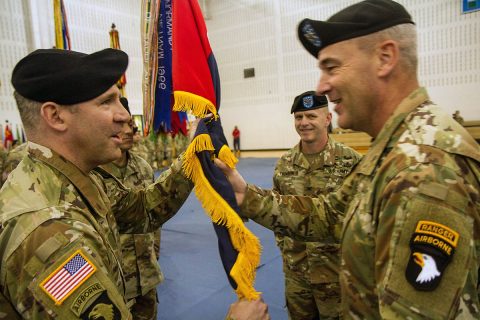 He spoke of the brigade’s success, the exceptionally tight relationship with Bastogne’s community partners and the integral value of Soldiers.

With great pride in his unit, he went on to mention that this brigade is filled with the right people, fortitude and toughness to win.

During his tenure, 1st Brigade Combat Team, 101st Airborne Division assumed a joint mission in support of Operation Inherent Resolve dedicated to the enduring defeat of ISIS. Bastogne Soldiers were deployed across Iraq and the Syria border as part of Combined Joint Task Force – Operation Inherent Resolve. The brigade previously returned from that nine-month deployment in October 2019.

Maj. Gen. Brian Winski, commander of the 101st Airborne Division, spoke highly of Bastogne brigade and Thomson’s efforts during his time in command. 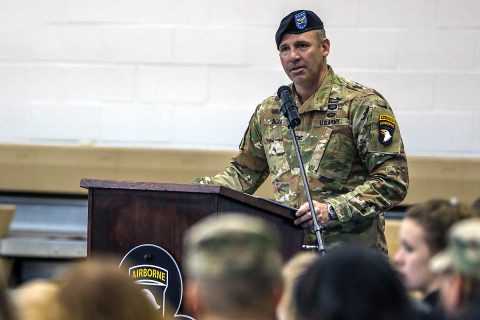 “Bastogne brigade lived up to their historic legacy and he no doubt built upon that,” said Winski.

Thomson will head to the United Kingdom for his next assignment.

Born, a native of Burke, VA, is a 1996 graduate of the United States Military Academy and joins the brigade with experience from the joint staff in Washington.

He is no stranger to the 101st Airborne Division as he previously served as the operations officer for both 2nd Battalion, 506th Infantry Regiment and 4th Brigade Combat Team. Both assignments included service in Paktika, Afghanistan in support of Operation Enduring Freedom.

Winksi gave praise to the new commander and welcomed his family to the team.

“Rob is an ideal fit for this command and I have no doubt that he will lead Bastogne exceptionally,” said Winski.

Born gave thanks to Winski for the opportunity to command and be a part of the 101st Airborne Division.

“I am truly honored to take command of this historic organization,” said Born. “Thank you for allowing me to lead the best brigade within the best division in the United States Army.”

The new commander praised his family for their support and he also gave his final thanks to Thomson as he smoothly transitioned to becoming the new “Bastogne 6”.

“Since I found out I was going to be the new “Bastogne 6″ I have had a tremendous friend and mentor in Derek Thomson,” said Born.

As the brigade takes on new leadership they will maintain the same professionalism and lethality ready for their next rendezvous with destiny.