Clarksville, TN – No matter how Saturday turned out at Fortera Stadium, it was destined to be a day of firsts for Austin Peay State University (APSU) football team.

It turned the Govs aren’t done making history yet. 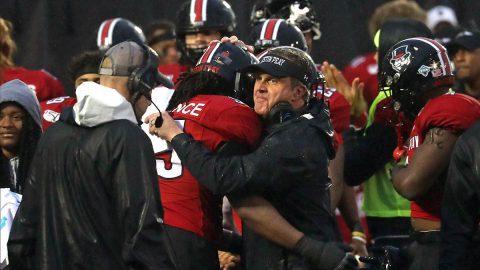 After the build-up of the week, the anticipation of the day and then a delay at kickoff as inclement weather entered the area… it turns out, the APSU Govs controlled every aspect of play in a 42-6 contest that served not only as the first playoff victory in program history but also, since we’re now representing the league, the second straight year an Ohio Valley Conference school advanced past the opening weekend.

After a near-miss Trent Taylor [1] interception, the Govs forced an opening-drive three-and-out, the Govs embarked on a 13-play march down to the Furman goal line. With the Govs in jumbo formation on second-and-goal, Craig lofted a pass to a wide-open Elijah Brown [2] in the back of the end zone to get the Govs on the board first.

The teams traded punts to close the first quarter, then it was the Paladins turn to take a march. A rare Furman shot down the field netted 24 yards, then an ill-timed unsportsmanlike conduct penalty put the Paladins in Austin Peay State University territory. Devin Wynn galloped for 28 yards on Furman’s biggest play of the drive—and the game, as it turns out—to get into the Governor red zone, but the Govs were able to hold Furman to a field goal when the defense snuffed out a pair of runs and forced an incompletion.

And then… the delay. After the kickoff following the touchdown, the deluge reached its peak and play was halted at 1:24 p.m. A 92-minute delay ensued before resumption at 2:56 p.m. The teams traded possessions, highlighted by a near-miss 59-yard field goal attempt by Furman, before the half ended with no further points on the board.

Business picked up for the Govs in the second half.

The third quarter saw an invigorated Austin Peay State University offense march 70 yards in a mere four plays, ending in a 15-yard Craig-to-DeAngelo Wilson [3] strike for six. After a Furman three-and-out, ending in a Shaun Whittinghill [4] and John Wesley Whiteside [5] sack, the Govs took over their own 33, then were moved back after a first-down block in the back call.

That’s when Craig dropped back and found Kentel Williams [7] underneath. The next 73 yards unfolded in slow motion for everyone except Williams, whose exceptional speed allowed him to coast home with a program-changing score.

They say bad things come in threes, which was confirmed for Furman on the first play of the ensuing drive when Kordell Jackson [8] simply took the ball away from Hamp Sisson on a rush attempt. A fourth bad thing befell the Paladins in less than four minutes when Craig, blessed with a short field, shovel-passed to Prince Momodu [9] for 29 yards then gave it to Momodu for the last four to pay dirt.

28-3. History unfolding for a second straight week at Fortera Stadium.

One of the nice little by-products that have come with the wins the Govs have earned this year is that they’ve unfolded in such as a manner as to be truly appreciated. Like a master sommelier, you can get the essence of the contest, really absorb the experience and take it all in.

If you’d spent years watching Austin Peay State University get ground into powder on a weekly basis, it’s hard to imagine there’s been anything quite as satisfying as entering the fourth quarter with the game firmly in hand, week over week.

If you stuck with us since the dark days, enduring as the pain unfolded week after week, I hope this one is sweeter for you.

The APSU Govs entered the fourth with a 35-3 lead after another Williams score, this one coming when the Govs picked up a muffed punt deep in Furman territory. Williams took a swing pass from Craig down to the one, then plunged the final yard himself. He finished with four catches for 103 yards and 11 rushes for 57. Rumors abounded regarding Mr. Williams’ health after he missed the regular season finale—those rumors appear to have been exaggerated.

Furman booted a fourth-quarter field goal. Baniko Harley [10] ran for a 24-yard score. Erskine Francis [11] wrestled a pick away from a Furman receiver. Nice, but at that point there was a lot of clock-watching as the Govs counted down the seconds until they could kick off the next round of water-cooler showers.

From the stat line, it’s hard to believe Craig endured the same downpour as everyone else on Saturday; he finished a tidy 18-for-23 for 264 yards and three touchdowns. Jack McDonald [13] led a swarming defense with nine tackles and a tackle for loss. But this was completism at its finest. The Govs played a perfect game at the perfect time.

To paraphrase the head coach of another football juggernaut, the Govs are now, “on to Sacramento.” Austin Peay State University will the Hornets of Sacramento State, the No. 4 seed nationally, in an 8:00pm CT showdown at Hornet Stadium.