Knoxville, TN – The Tennessee Lady Vols basketball team (6-0), who are ranked 20th in this week’s AP Poll and debuted on November 26th at No. 25 in the USA Today Coaches Poll, welcome Air Force (1-6) to Thompson-Boling Arena for a 1:02pm CT contest on Sunday. 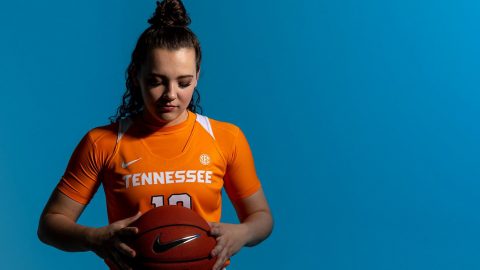 After facing Air Force (December 1st), UT welcomes Texas (December 8th) and Colorado State (December 11th) to The Summitt. The Air Force game is part of UT’s Salute to Service Week, while the Texas match-up is part of the Big 12/SEC Challenge.

The meeting with the Falcons is the first-ever between the programs in women’s hoops.

Tennessee stayed perfect on the season on Tuesday night, bolting to a 48-11 halftime lead and coasting to a 92-51 victory over Arkansas-Pine Bluff. Air Force, meanwhile, began a two-game eastern U.S. swing in Annapolis, MD, dropping a 67-59 decision against Navy on Wednesday evening.

Sunday’s game will be televised by the SEC Network with Eric Frede (PxP) and Christy Thomaskutty (Analyst) on the call.

It’s Salute to Service Week, when we honor all who have served and say thank you for their service and sacrifice. Current military members and veterans may present their Military ID or DD 214 at Gate C, Gate E or the ticket tent located on Phillip Fulmer Way prior to entering Thompson-Boling Arena for complimentary admission for themselves and their immediate family.

Tickets are available for the general public at AllVols.com. Spark the Summitt with tickets starting at $5.00! Gates open at 12:00pm

Enjoy the pregame Kids’ Corner at Gate F. It opens one hour prior to tip-off. Fun includes free face painting, the Big Orange prize wheel, visits from Smokey and cheerleaders, crafts and more.

Participate in “High-5 the Lady Vols.” Kids 12 & younger can pick up a wristband at the Fan HQ table on the concourse to participate in the pregame High-5 tunnel. Wristbands are limited. To purchase discounted group tickets and reserve wristbands for your team, please call 865.946.7000.

Post-game Lay-ups: Kids 12 & younger can shoot a lay-up on the court after the game!

No. 20/25 Tennessee moved to 6-0 on the season, defeating the University of Arkansas at Pine Bluff, 92-51, on Tuesday night at Thompson-Boling Arena.

The Lady Vols were led by junior forward Rennia Davis [2], who recorded her fourth double-double of the season with 17 points and 11 rebounds. Sophomore Rae Burrell [3] added a career-high 17 points, while junior Kasiyahna Kushkituah [4] chipped in 15.

The Golden Lions (0-4) were paced by junior Trasity Totten, who finished the night with 19 points and four rebounds. Jayla Atmore and Tyler Pyburn contributed 12 and 11, respectively.

Tennessee finished the game with 54 points off the bench and 62 in the paint, both season bests. The Lady Vols also out-rebounded the Lady Lions 53-32, continuing their streak of out-performing their opponents on the boards for the sixth-straight game.

Notes From The Last Game

Balanced Attack: Tennessee’s first four baskets came from four different players, and by halftime 10 of the 11 active roster members had scored at least two points. By the end of the game, Tennessee had seven players with five or more points and three in double figures.

Lockdown Defense: The Lady Vols held Arkansas-Pine Bluff scoreless for nearly nine minutes in the second quarter, allowing just four points to tie for the third-fewest allowed in a quarter all-time. The 11 points allowed in the first half tied for the fifth-fewest scored by a UT opponent in any game.

Hot Hands: The 92 points against the Golden Lions was the highest point total managed by a Lady Vol team since they scored 98 against Murray State on December 28th, 2018. With a field goal percentage of 54.5 percent against UAPB, the Lady Vols posted their highest shooting percentage of the season and best since clicking at a 61.7 rate vs. Liberty in the NCAA First Round on March 16th, 2018.

Double-Double Davis: Junior Rennia Davis [2] logged her fourth double-double of the season with 17 points and 11 rebounds. The effort moved her career total to 22, tying her with Shekinna Stricklen, Karla Horton and Shyra Ely for the 11th-most career double-doubles by a Lady Vol.

Harper History In The Making

On November 18th, 2019, Kellie Harper [6] became the 40th person to play for and coach an AP-ranked women’s basketball team when UT debuted at No. 23.

She became the 13th person to accomplish that feat at the school where she also played.

According to Hoops Guru Mel Greenberg, UT and USC are the only schools with two alums to accomplish that feat. Harper and Holly Warlick did so at Tennessee, while Cheryl Miller and Cynthia Cooper-Dyke did so at Southern Cal.

She will attempt to join Jim Foster (St. Joseph’s, Vanderbilt, Ohio State, Chattanooga) in becoming the only coaches to take four different women’s teams to the NCAA tourney.

Tennessee has opened a season 6-0 for the third year in a row and will attempt to make it 7-0 for the  third time in as many seasons and for only the fifth time in the past 10 years.

Junior guard/forward Rennia Davis [2] has posted double-doubles in three of her past four games. She ranks No. 8 nationally with four double-doubles.

The Lady Vols have won the rebounding battle in all six games and have an +18.3 margin vs. opponents.

Eight players currently are averaging at least 4.5 rebounds per game, led by Rennia Davis [2] at 8.5 and Kasiyahna Kushkituah [4] at 6.2. Seven different players have led the squad in rebounds during the first six games.

Tennessee is allowing only 51.2 points per game and has given up more than 51 points in only two of its six contests.

At home, the Lady Vols are allowing only 44.0 ppg.

The highest field goal percentage UT has allowed in a game this season was .348 to East Tennessee in the opener.

Jazmine Massengill [9] has recorded 15 assists vs. only three turnovers in four home games this season.

Kasiyahna Kushkituah [4] is shooting 63 percent from the field and averaging 10.3 ppg. in home contests.

Tennessee has had 16 or more assists in each game this season and a season-best 25 vs. UAPB.

The Big Orange have been big on swatting shots, averaging 7.5 blocks per contest. Tamari Key [10] averages 2.8 per game.

Tennessee and Air Force are meeting for the first time in women’s basketball. This is also the first time a Kellie Harper [6]-coached team has faced the USAFA program.

The Falcons are members of the Mountain West Conference.

UT is 3-0 in all-time meetings vs. schools currently in the MWC.

UT is 1-0 each vs. MWC schools Boise State, San Jose State and UNLV.

In the most recent meeting with a Mountain West Conference program, a No. 6/5 Lady Vol unit turned back the Boise State Broncos in Knoxville during the NCAA First Round on March 21st, 2015, 72-61.

The most recent meeting between the Lady Vols and a service academy occurred on November 13th, 2016, when Tennessee played host to Navy. Tennessee came away with an 85-55 victory in that match-up.

Kamera Harris [13] was the only current member of the team to play in that contest vs. Navy, carding one blocked shot in the match-up.

The second of UT’s two all-time contests vs. Army occurred on March 19, 2006, when then-redshirt freshman Candace Parker set an NCAA record with two dunks in a 102-54 win in Norfolk, VA.

Air Force returned four starters and six other letterwinners from a year ago, when an extremely young Falcon squad posted an 8-22 ledger and finished 10th in the Mountain West Conference with a 4-14 record.

The team is still quite youthful, featuring no seniors, two juniors, five sophomores and five freshmen. First-year player Kamri Heath has started all six games for the Falcons, joining two juniors and two sophomores in the lineup.

Kaelin Immel is leading the Air Force in scoring for the third-straight season, averaging 14.9 points per game.

Associate head coach Stacy McIntyre was a standout player at Kentucky, a two-time team captain, an All-SEC Second Team honoree in 1992 and a 1994 graduate.

The Falcons were picked to finish 10th this season in the Mountain West Conference.

Air Force dropped a 67-59 contest to Navy, Wednesday evening in Alumni Hall on the campus of the United States Naval Academy.

The Falcons, now 1-6 on the season, were led by junior co-team captain Kaelin Immel who scored a season-high 24 points on the night.  The Mids ended their three-game losing streak, improving to 3-3 on the season.

Immel, who has led the Falcons in scoring for three-straight games, left it all on the court, snagging six rebounds and dishing three assists while shooting 9-of-17 from the field in her attempt to rally the Falcons to victory.

A native of Beaverton, Ore., Immel has two 20-point games and five double-figure scoring marks this season. She now has 952 career points, continuing her run to become the 16th all-time Falcon to achieve 1,000 career points.