Lexington, KY – On the road against the No. 14 team in the country, Austin Peay State University (APSU) women’s basketball struggled to find its rhythm on offense end and after falling behind early, were unable to close the gap and fell, 81-52, to Kentucky in Memorial Coliseum. 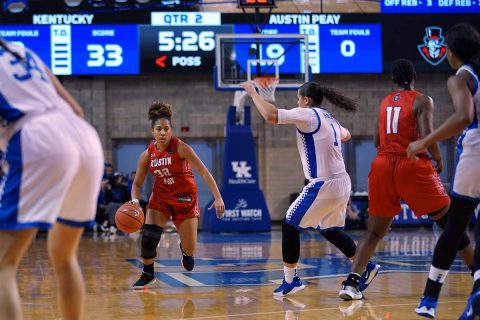 Falling behind 11-2 to start a game can put an end to a lot of teams days before they even get started, but that wasn’t the case for the Governors, who fought back to post a 17-spot in the first quarter.

The problem was that Kentucky had their best quarter of the day in the first, scoring 24 and shooting 50 percent from the floor.

Trailing by seven points after ten minutes, the Govs went ice cold in the second quarter. In shooting 3-of-16 from the floor in the second, the Governors could only put six points on the scoreboard, while the Wildcats began to stretch their lead and at the break, the Governors trailed by 22 points.

Maggie Knowles [1] came out firing to start the second half.. The sophomore from Murfreesboro Tennessee knocked down a pair of triples, to pace the offense in the third quarter. But the Wildcats shot 50 percent from the floor again and extended their lead by six points heading into the final quarter.

At the end of the day, the Governors effort was there; they forced the No. 14 team in the country to turn the ball over 18 times; and held the reigning SEC Freshman of the Year Rhyne Howard to 14 points, which is 4.5 points less than her season average.

Brianah Ferby [2] posted a season-high 13 points in her first game back after missing the past three contests.

The Governors out rebounded Kentucky 12-9 on the offensive end, and scored 12 more second-chance points that the Wildcats.

The Govs bench posted 30 points again, and outscored the Wildcat reserves by two.

Arielle Gonzalez-Varner’s [3] streak of scoring in double-digits came to an end, she had previously scored in double-figures in four straight games.

The Govs 52 points was the second highest point total posted against Kentucky this season.

The APSU Women’s basketball team takes the next 13 days off, before returning to action with a 2:00pm, December 14th, matchup at Alabama A&M.