Nashville, TN – Including the regular season and playoffs, this week marks the 51st all-time game between the Tennessee Titans and the Oakland Raiders organizations, two of the original eight members of the American Football League.

The rivalry has been filled with historically significant contests, including their very first matchup. On September 11th, 1960, the Houston Oilers defeated the Raiders 37-22 in the first game of either franchise’s existence. 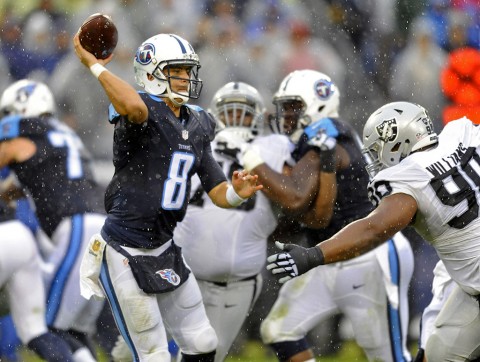 Tennessee Titans quarterback Marcus Mariota (8) attempts a pass during the second half against the Oakland Raiders at Nissan Stadium on November 29th, 2015. The Raiders won 24-21. (Christopher Hanewinckel-USA TODAY Sports)

The Raiders have a considerable lead in the series at home. The Oilers/Titans have won only five of 20 games on the road against the Raiders, including a mark of 2-11 at Oakland-Alameda County Coliseum.

The Titans franchise has achieved its greatest margin of victory in a game against the Raiders — 55-0 on September 9th, 1961— but also suffered its third-worst defeat against them — 56-7 in a playoff game on December 21st, 1969.

The two clubs played in every season from 2001-05, including two meetings during the 2002 campaign, both of which resulted in Titans losses at Oakland — the first in the regular season and the second in the AFC Championship Game.

The Titans won three consecutive battles with the Raiders from 2007– 2013, but then the Raiders escaped Nissan Stadium with victories in each season from 2015-17.

2015 Week 12 • Nov. 29, 2015 • RAIDERS 24 at Titans 21
Raiders quarterback Derek Carr passes for 330 yards and three touchdowns, including the game-winner in the final two minutes. Seth Roberts’ gameclinching touchdown catch for the Raiders (12 yards) comes after a defensive holding call on the Titans on a fourth-down incompletion. Roberts (113) and Amari Cooper (115) each go over 100 receiving yards. Marcus Mariota throws three touchdown passes but is intercepted twice. Raiders outgain the Titans 407 yards to 249 and limit the Titans to 44 rushing yards.

2016 Week 3 • Sept. 25, 2016 • RAIDERS 17 at Titans 10
A late rally by the Titans comes up short, as a fourth-down pass by Marcus Mariota to Harry Douglas sails incomplete into the end zone with 12 seconds remaining. The Titans rush for 181 yards, including 114 from DeMarco Murray, but commit three turnovers and eight penalties. Two of their penalties come in the final minute inside the 20-yard line, including a touchdown-negating pass interference penalty. The Raiders score touchdowns on a 22-yard run by Latavius Murray and a 19-yard reception by Seth Roberts.

2017 Week 1 • Sept. 10, 2017 • RAIDERS 26 at Titans 16
The Titans open their season with 256 passing yards and a touchdown from Marcus Mariota, but Derek Carr completes two touchdown passes in the Raiders victory. Oakland’s Giorgio Tavecchio is perfect on four field goals in his debut. The Titans go 1-for-3 in the red zone. Corey Davis makes his NFL debut with six receptions for 69 yards. The Titans cut the deficit to 23-16 with 4:49 remaining but Oakland drives to put the game away with a final field goal.