Posted By Clarksville Online News Staff On Sunday, December 8, 2019 @ 1:30 am In Technology | No Comments

Huntsville, AL – Engineers are preparing to push a test article identical to the world’s largest rocket fuel tank beyond its design limits and find its breaking point during upcoming tests at NASA’s Marshall Space Flight Center in Huntsville, Alabama.

Earlier this year, a NASA and Boeing test team subjected a test version of the Space Launch System (SLS) liquid hydrogen tank to a series of 37 tests that simulate liftoff and flight stresses by using large hydraulic pistons to push and pull on the test tank with millions of pounds of force. 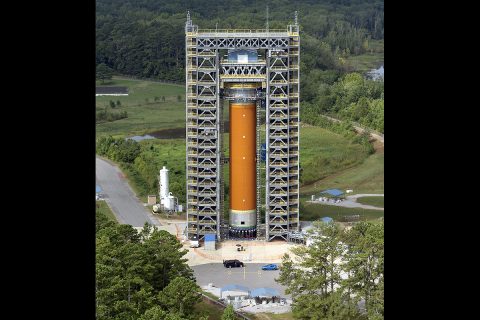 Engineers are preparing to push a test article identical to the world’s largest rocket fuel tank beyond its design limits and find its breaking point during upcoming tests at NASA’s Marshall Space Flight Center in Huntsville, Alabama. This will be the largest-ever controlled test-to-failure of a NASA rocket stage fuel tank. (NASA/MSFC)

The test article aced these tests and showed no signs of cracks, buckling or breaking and qualified the design for flight. Now, the team wants to see just how much the tank can take.

“Space exploration involves risk,” said Julie Bassler, manager of the Space Launch System Stages Office. ““This is a different kind of exploration that happens before we launch. A test to failure of the largest liquid hydrogen tank ever produced will expand our knowledge to ensure we can safely get the most performance out of the rocket that will send astronauts and large cargo to the Moon and then to Mars.”

The hydrogen tank is part of the SLS core stage. Measuring more than 130 feet tall and 27.6 feet in diameter, it stores 537,000 gallons of super cooled liquid hydrogen to help power the four SLS core stage RS-25 engines for the 8-minute climb to orbit at more than 17,000 miles per hour. The test article’s structure is identical to that of the flight hardware.

Having certified the tank for both the current version of SLS, called Block 1, as well as the more powerful Block 1B version in development, engineers are preparing their 215-foot-tall test stand for one final test to see exactly how much stress the hydrogen tank can take before it fails structurally.

Built by Boeing at NASA’s Michoud Assembly Facility in New Orleans and barged to Marshall last December, the hydrogen tank test article has been fitted with thousands of sensors measuring, stress, pressure, and temperature, while high-speed cameras and microphones capture every inch for the expected telltale buckling or cracking in the cylindrical tank wall.

“The core stage hardware structures are brand new, first-time developments, so this testing is crucial to ensuring mission success,” said Luke Denney, qualification test manager for Boeing’s Test & Evaluation Group. “The tests were designed to prove that each component of the stage will be able to survive its own unique set of extreme environmental conditions during liftoff, ascent and flight.”

In fact, this will be the largest-ever controlled test-to-failure of a NASA rocket stage fuel tank, said Mike Nichols, Marshall’s lead test engineer for the tank.

“The failure mechanism of a slender multi-segment rocket stage is not very well understood,” he said. “By taking this test article to failure, we can better understand the phenomenon. This test will benefit all rocket engineers, providing valuable data for their propellant tank designs for future rocket stages.”

Engineers have computer calculations that predict when and where and how the tanks should fail. But without a carefully planned test they won’t know exactly. That difference is important for NASA’s plans to return human explorers to the Moon.

“In spaceflight, especially human spaceflight, we always walk the line between performance and safety, said Neil Otte, the chief engineer for the SLS Stages Office.  “Pushing systems to the point of failure gives us additional data to walk that line intelligently.  We will be flying the Space Launch System for decades to come, and we have to take all the opportunities we have to maximize our understanding of the system so we may safely and efficiently evolve it as our desired missions evolve.

This is not the first SLS test article to be tested to structural failure. Test versions of the engine section and intertank were also tested until they broke above 140% of anticipated flight stresses.

While engineers predict the test will not create a sizable hole in the tank, should that happen, areas of the community close to Redstone Arsenal hear a low-level sound as the nitrogen gas used to pressurize the tank is vented.

The 212-foot-tall core stage is the largest, most complex rocket stage NASA has built since the Saturn V stages that powered the Apollo missions to the Moon. SLS and Orion, along with the Gateway in orbit around the Moon, are NASA’s backbone for deep space exploration and the Artemis program, which will send the first woman and next man to the lunar surface by 2024.

SLS is the only rocket that can send Orion, astronauts, and supplies to the Moon on a single mission.