Posted By Clarksville Online News Staff On Tuesday, December 10, 2019 @ 1:30 am In Technology | No Comments

The test version of the Space Launch System rocket’s liquid hydrogen tank withstood more than 260% of expected flight loads over five hours before engineers detected a buckling point, which then ruptured. Engineers concluded the test at approximately 11:00pm. 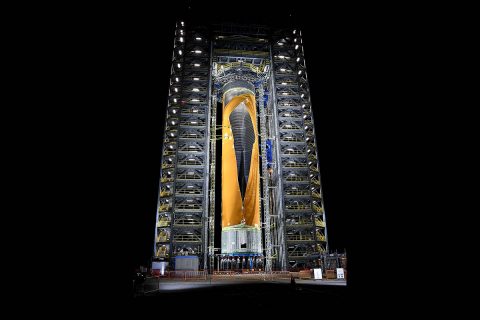 The December 5th test pushed the tank to its limits to see how much force it would take to cause the tank’s structure to fail. This image shows the resulted buckling of the structure when the tank failed after exposure to more than 260% of expected flight loads over 5 hours. (NASA/Dennis Olive)

“We purposely took this tank to its extreme limits and broke it because pushing systems to the point of failure gives us additional data to help us build rockets intelligently,” said Neil Otte, chief engineer of the SLS Stages Office at Marshall.

“We will be flying the Space Launch System for decades to come, and breaking the propellant tank today will help us safely and efficiently evolve the SLS rocket as our desired missions evolve,” Otte stated.

The test version of the tank aced earlier tests, withstanding forces expected at engine thrust levels planned for Artemis lunar missions, showing no signs of cracks, buckling or breaking. The test on December 5th — conducted using a combination of gaseous nitrogen for pressurization and hydraulics for loads — pushed the tank to the limits by exposing it to higher forces that caused it to break as engineers predicted.

Earlier tests at Marshall certified the tank for both the current version of the SLS — called Block 1, which will use an upper stage called the Interim Cryogenic Propulsion Stage [1] — and the Block 1B version that will replace the ICPS with the more powerful Exploration Upper Stage [2].

For all the tests, NASA and Boeing engineers simulated liftoff and flight stresses on a test version of the Space Launch System [3] liquid hydrogen tank that is structurally identical to the flight tank. Throughout the tests in Marshall’s 215-foot-tall test stand, they used large hydraulic pistons to deliver millions of pounds [4] of punishing compression, tension and bending forces on the robust test tank.

The test tank was fitted with thousands of sensors to measure stress, pressure and temperature, while high-speed cameras and microphones captured every moment to identify buckling or cracking in the cylindrical tank wall.

“The initial tank buckling failure occurred at the same relative location as predicted by the Boeing analysis team and initiated within 3% of the predicted failure load,” said Luke Denney, qualification test manager for Boeing’s Test & Evaluation Group. “The accuracy of these predictions against real life testing validates our structural models and provides high confidence in the tank design.”

“We are happy that NASA’s tests with the core stage structural test article will contribute not only to Space Launch System flights but also to the design of future rocket propellant tanks,” said Julie Bassler, manager of the SLS Stages Office.

SLS is the only rocket that can send Orion, astronauts and supplies to the Moon on a single mission. SLS, Orion and the Gateway [9] in orbit around the Moon, are NASA’s backbone for deep space exploration and the Artemis program, which will send the first woman and next man to the lunar surface by 2024.