Buffalo, NY – In a back and forth affair tonight, the Nashville Predators came up short against the Buffalo Sabres, 4-3.  Nashville held the lead twice tonight, only to lose it’s grip against the Sabres.

Matt Duchene got things started in the first minute of the game when he drove the puck into the zone and slipped a shot past Linus Ullmark for the early 1-0 lead.

Jimmy Vesey then took a deflection off of a Rasmus Ristolainen shot on goal and slipped it past Juuse Saros in goal for the Predators and the game was tied, 1-1. 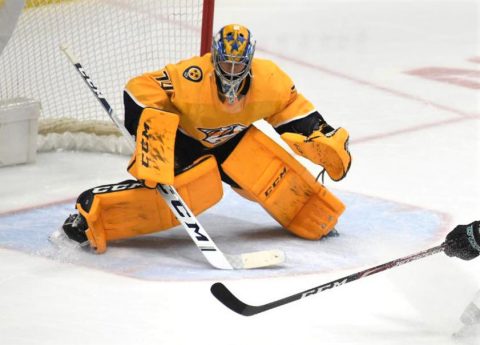 Nashville’s Colton Sissons then gave the Predators the lead again at 15:32 when he took his position in the slot and redirected a Ryan Ellis shot that soared past Ullmark, and the Predators took a 2-1 lead.

In the second period at 4:55, Jack Eichel fired a short sided wrist shot to the top shelf past Saros and pulled the Sabres even, 2-2.  Then at 14:21, it was Eichel again when the puck bounced off of his backside into the net for the Buffalo 3-2 lead.

Ryan Johansen would bring the Predators even at 16:07 of the second period taking a deflection off of a Filip Forsberg shot on goal and buried it to bring Nashville even, 3-3.

But it was Victor Olofsson who would give Buffalo the win at 8:29 of the final frame, missing the tap-in try but staying with the puck and burying the rebound for the final score, 4-3.

The Predators out shot their opponent 39-32, but came up short once again.