Tampa, FL – December is finally bringing cheaper gas prices to pumps across the country. Today’s average is $2.55, which is nearly a nickel cheaper than the beginning of the month.

Decreasing gasoline demand and increasing stocks are driving the change in pump prices. The latest Energy Information Administration (EIA) reports show gasoline demand at its lowest rate since mid-February and the highest stock levels since this summer.

“This is causing gas prices to be less expensive. In the lead up to the holidays we may see a small spike in demand, but not enough to impact gas prices substantially,” Casselano stated. 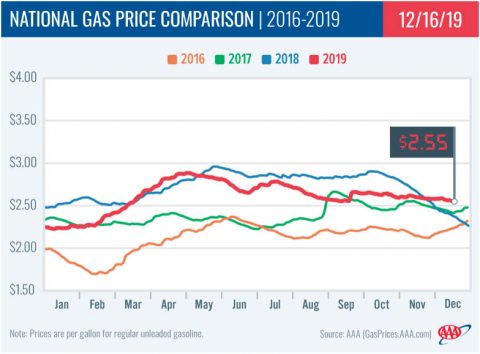 Aside from Ohio (+8 cents), gas price averages are cheaper on the week across the Great Lakes and Central States. Michigan had the largest decline with a nine-cent drop. Gas prices edged lower as the region saw a 1.4 million bbl build in gasoline stocks.

In fact, regional stocks have mostly increased since the beginning of November according to EIA data.

Year-over-year, gas prices in the region are more expensive, ranging from nearly a dime to 50 cents more than mid-December 2018. However, compared to last month, most drivers in the region are paying as much as a dime less to fill-up.

State gas price averages in the Mid-Atlantic saw minimal movement this week. Delaware ($2.31) saw the largest decrease at three cents, followed by North Carolina at two cents. All other states in the region saw prices decline by a penny or hold steady since last Monday. Gas prices range from $2.29 in Virginia to $2.75 in Pennsylvania.

For a second week, gasoline stocks saw a substantial 1.6 million bbl increase. According to the EIA, that bumps total stocks up to their highest level in six weeks, up to 62.3 million bbl, which is a nearly 3 million bbl year-over-year surplus. The region is poised to see gas prices continue to decline through the year-end. 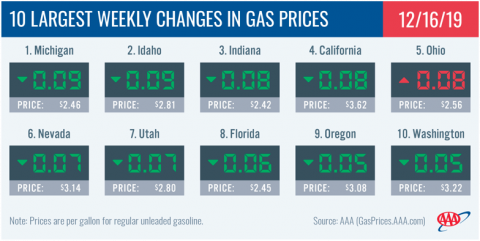 On the week gas prices edged cheaper across the region, except in Texas (+3 cents). Florida (-6 cents) saw the largest decline, but most states only saw pump prices push cheaper by a few cents.

Gasolines stocks continued to build, but only by a half a million bbl to push total stocks to 83.4 million bbl, per EIA data. The small increase is likely why most states saw small movements at the pump on the week. Stocks have been consistently building since the beginning of November. This is a trend that should continue into the new year and bring even cheaper gas prices for motorists in the region.

Increased gasoline stocks continue to help put downward pressure on pump prices, even as demand remains robust. According to EIA’s report for the week ending on December 6th, gas stocks in the region grew by 1.56 million bbl, bringing the total to 31.15 million bbl. The current supply level is 2.81 million bbl higher than last year’s level at this time, which will likely continue to help prices in the region decline throughout the week.

Idaho ($2.81), Utah ($2.80) and Colorado ($2.75) land on the top 10 list for the most expensive state averages in the country this week. That is despite each of those states seeing gas prices decline on the week, as much as eight cents. Wyoming ($2.68) and Montana ($2.64) are also carrying less expensive gas prices at the start of this work week.

Regional refinery rates jumped by 7% in EIA’s latest report as gasoline stocks built to hit nearly 7.5 million bbl. Total stocks sit at a half a million bbl surplus compared to mid-December last year. If refinery utilization and stocks continue to increase, motorists in the region will see gas prices push even cheaper.

At the close of Friday’s formal trading session on the NYMEX, WTI increased 89 cents to settle at $60.07. Crude prices jumped up after the United States and China announced that the world’s two largest crude consuming countries have reached a tentative “Phase One” trade agreement that reduces some U.S. tariffs in exchange for increased Chinese purchases of American farm goods.

Since the start of the trade war between the two countries, crude prices have suffered because of reduced crude demand expectations as a result of the countries having to pay more for each other’s goods.

If trade tensions continue to decrease, crude prices could increase again this week due to reduced market concerns that crude demand will decrease next year.