Nashville, TN – In head-to-head regular season matchups, the Tennessee Titans and New Orleans Saints have played a total of 14 times, with the Titans holding a 8-5-1 advantage. That includes a four-game winning streak by the Titans that was broken with a Saints victory in 2011.

The most recent meeting at Nissan Stadium was on December 11th, 2011, when the Saints escaped with a 22-17 victory. Titans rookie quarterback Jake Locker entered the game for an injured Matt Hasselbeck in the second quarter and nearly pulled out an improbable victory. 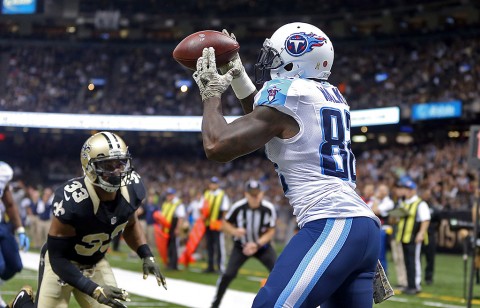 However, he was out-dueled by Saints starter Drew Brees, who put up 337 passing yards and a pair of fourth-quarter touchdown passes.

In 2015, the Titans traveled to New Orleans and won 34-28 in overtime. It was the first game the Titans played under interim head coach Mike Mularkey. Rookie quarterback Marcus Mariota’s fourth touchdown pass of the game was the game-winner in overtime.

The last time the Titans and Saints met in primetime was at the Mercedes-Benz Superdome for Monday Night Football on September 24th, 2007.

Titans linebacker Keith Bulluck recorded a career-high three interceptions, tying a franchise record, in helping the team to a 31-14 win.

The initial regular season matchup between the Saints and the then-Houston Oilers occurred in 1971, five seasons after the Saints began play as an expansion franchise in the NFL. The game resulted in a 13-13 score, one of the six ties in Oilers/Titans history.

The Titans and Saints have a long-standing preseason rivalry. In 30 meetings in the preseason, the Saints lead 15-14-1. They met every preseason from 1968-87, and only the Dallas Cowboys have played the Oilers/Titans more often in the preseason (34 games) than the Saints.

2003 Week 3 • Sept. 21, 2003 • Saints 12 at TITANS 27
Eddie George rushes for 100 yards and a touchdown for the Titans, while New Orleans’ Deuce McAllister is limited to eight yards on 11 carries. Steve McNair passes for 252 yards, including a two-yard touchdown to Justin McCareins in the first quarter and a five-yard touchdown to Drew Bennett (eight receptions for 105 yards) in the third quarter.

The Titans hold the Saints to 188 total yards, including 77 yards in the first half. During the contest, McNair becomes the fifth player in NFL history, as well as the youngest, to reach 20,000 passing yards passing and 3,000 rushing yards.

New Orleans grabs a 14-10 lead in the third quarter on a one-yard Reggie Bush run, but the Titans come back to score on a one-yard LenDale White rush and a three-yard touchdown pass from Young to tight end Bo Scaife. Vincent Fuller secures the win with a 61-yard interception return for a touchdown.

2011 Week 14 • Dec. 11, 2011 • SAINTS 22 at Titans 17
Drew Brees passes for 337 yards with two touchdowns in the fourth quarter to Marques Colston. Titans rookie Jake Locker enters the game in the second quarter after Matt Hasselbeck injures a calf. Locker rushes for a touchdown and completes a 40-yard touchdown pass to Nate Washington.

Locker’s 282 passing yards are second-most in franchise history by a rookie. Washington totals 130 yards on six receptions. Locker is sacked by Jo-Lonn Dunbar at the New Orleans eight-yard line on the final play.

2015 Week 9 • Nov. 8, 2015 • TITANS 34 at Saints 28 (OT)
Marcus Mariota’s fourth touchdown pass is a five-yarder to Anthony Fasano in overtime. Mariota goes 28-of-39 for 371 yards and no interceptions. He ties the game in the fourth quarter with a touchdown pass to Justin Hunter and two-point conversion to Delanie Walker.

The Titans force two turnovers and sack Drew Brees (28-of-39 for 387 yards) four times. Walker registers two touchdown catches, including a 61-yarder. The teams combine for 899 yards of offense, including 483 by the Titans.