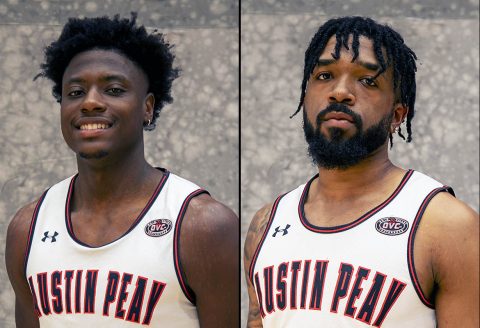 Already, it’s the second time this season the duo have earned league honors in the same week, with the first coming the week of November 25th.

Taylor posted two 30-point efforts in three games last week, lifting an APSU team decimated by a rash of injuries to a 2-1 mark. He opened the week by dropping 39 points on McKendree in Austin Peay State University’s final home nonconference appearance, including 29 in the first half alone.

He followed that up with 14 points and 11 rebounds against then-unbeaten Duquesne, one of the nation’s premiere front lines, and closed the week with a 30-point effort against Alabama State when the Govs were down to just eight dressed players.

A Silsbee, Texas native, Adams broke big at the St. Pete Shootout with back-to-back 20-point efforts for the first time in his Austin Peay State University career, concluding his stay in the Sunshine State with his first 30-point night as a Gov against Alabama State. He also tied his career high with five assists against the Hornets and went 10-for-10 at the free-throw line, the first Gov to post a perfect night from the charity stripe with at least 10 attempts since 2015 (Josh Robinson [3] vs. Wofford, December 22nd, 2015).

Pick any high-scoring duo from recent APSU memory—Drake Reed and Wesley Channels, Chris Horton [4] and Josh Robinson [3], Nick Stapleton and Trenton Hassell. In recorded digital archives dating back to 1999-00, no Austin Peay State University teammates had scored 30 points in the same game until Taylor and Adams each reached the mark against Alabama State.

OVC foes, be prepared: Adams, Taylor and the Govs have one final nonconference tune-up at Georgia, December 30th, before beginning the league slate January 2nd.