Nashville, TN – The Tennessee Titans-Houston Texans rivalry is in its 18th year since the expansion Texans began play and the AFC South was formed in 2002. In 35 games, the Titans are 18-17 against the Texans, including an 11-7 mark at Nissan Stadium and a 7-10 record at NRG Stadium.

In the last three seasons, the Titans and Texans have split the annual series, with the home team taking each game. 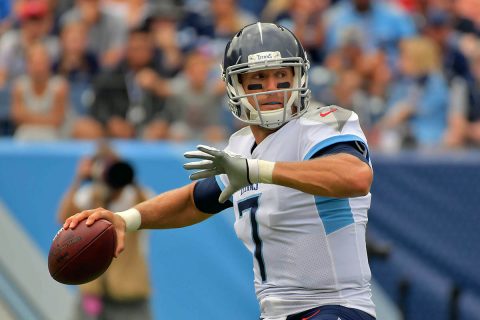 The Texans have been particularly tough opponents at home. They enter this week’s matchup with a seven-game winning streak against the Titans at NRG Stadium. The last time the Titans won there was January 1st, 2012.

Following that win by the Titans, the Texans won eight of the next nine overall meetings from 2012–2016. Then, on January 1st, 2017, the Titans ended the run with a win at Nissan Stadium.

The first Titans-Texans game of 2019 was played only two weeks ago, with Houston escaping Nashville with a 24-21 victory.

In the last meeting at NRG Stadium, a Monday night game on November 26th, 2018, the Texans won 34-17. The Texans were victorious despite Marcus Mariota setting a franchise record and finishing with what was then the NFL’s second all-time single-game completion percentage—95.7 percent (22 of 23).

Ten players who spent a significant portion of their careers in a Houston Oilers uniform are enshrined in the Pro Football Hall of Fame, including former quarterback Warren Moon, outside linebacker Robert Brazile, defensive tackle Curley Culp and offensive lineman Bruce Matthews. The team moved to Tennessee in 1997 and in 1999 adopted the “Titans” moniker.

Current Titans Controlling Owner and Co-Chairman Amy Adams Strunk is a graduate of the University of Texas and resides in Waller, Texas.

2017 Week 13 • Dec. 3, 2017 • Texans 13 at TITANS 24
After the Texas jump out to a 10-0 lead, Marcus Mariota rushes for a nine yard touchdown and completes a 24-yard touchdown pass to Delanie Walker. Derrick Henry’s 75-yard touchdown run to seal the win is preceeded by an interception by LeShaun Sims in the end zone to end a Houston threat. The Titans total 198 rushing yards. Texans quarterback Tom Savage passes for 365 yards but is sacked four times by the Titans defense. The Titans limit the Texans to 53 rushing yards.

2018 Week 12 • Nov. 26, 2018 • Titans 17 at TEXANS 34
The Texans overcome a 10-0 deficit by rushing for 281 yards and getting a pair of touchdown passes from Deshaun Watson to Demaryius Thomas. Texans tailback Lamar Miller rushes for 162 yards, including a 97-yard touchdown on the play following a failed Titans fourth-down attempt. Marcus Mariota completes 22 of 23 passes for 303 yards and two touchdowns, compiling at the time the second-best single-game completion percentage (95.7) in NFL history.

2019 Week 15 • Dec. 15, 2019 • TEXANS 24 at Titans 21
The Titans erase a 14-0 deficit in the second half before the Texans retake the lead with 10 points in the fourth quarter. Deshaun Watson completes two touchdown passes to Kenny Stills in the second quarter. Whitney Mercilus intercepts a Ryan Tannehill pass to Anthony Firkser at Houston’s two-yard line and returns the ball 86 yards to help set up Houston’s first touchdown. A.J. Brown leads the Titans with eight receptions for 114 yards, including a touchdown. The Titans intercept two passes deep in their own territory, including an interception by Jayon Brown in the end zone.