Clarksville, TN – The warmup is over; now, the Austin Peay State University (APSU) men’s basketball team embarks upon the Ohio Valley Conference schedule, beginning with Southeast Missouri, Thursday. This is the second game of a doubleheader, with the women’s contest set to tip off at 5:30pm in the Dunn Center. 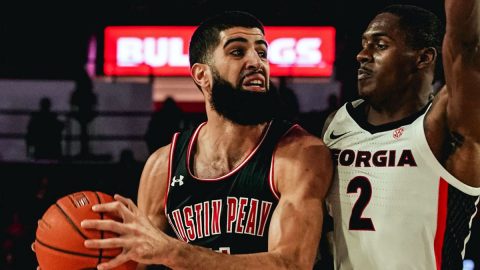 Old foes renewing their rivalry for the 63rd time, both the Govs and Redhawks have acquired their share of bruises during the non-conference slate, with two of Southeast Missouri’s top performers combining for three total games so far and the Govs having put 11 different players in the starting lineup at various points in 2019-20.

But that’s all in the past now as the 18-game sprint for the OVC regular season crown begins Thursday across the league.

About the Southeast Missouri Redhawks

Southeast Missouri ended the non-conference slate with a win, but it belies some struggles for Rick Ray’s squad, which has not defeated a Division I opponent since November 30th against Denver. Research suggests there are two things plaguing the Redhawks: an inability to find consistent scoring and interior rim protection.

Southeast Missouri ranks in the nation’s bottom-15 in assists, which has not helped with a 64.4 scoring average or a shooting percentage barely above 40.0 percent as a team. Defensively, the Redhawks are among the nation’s bottom-15 in blocked shots at 1.7 per game, which indicates an opportunity for Terry Taylor [1], Eli Abaev [2] and others to have productive days in the league opener.

While the numbers would tell you the Redhawks struggle, they don’t tell the whole story; Khalil Cuffee just returned after being sidelined with a concussion to open the season, and Chris Harris–the leading scorer for the Redhawks to open the season against Vanderbilt and Purdue Fort Wayne, has missed the last 11 games due to injury.

Those two, along with the consistent play of Alex Caldwell, Sage Tolbert, Skyler Hogan and DQ Nicholas, could provide the Redhawks with a diverse array of talent, if it can all get healthy.

Austin Peay State University’s 20th win of the 2018-19 season came against Southeast Missouri at the Dunn Center, where the Govs rolled to an 83-70 victory in the penultimate home contest of the season. The Redhawks hit 10 of their first 13 shots against the Govs, but were unable to contain Jabari McGhee [3] (18 points, 19 rebounds) in his finest performance as a Gov.

Terry Taylor [1] picked up career point No. 1500 and career rebound No. 700 on the same night in the nonconference finale against Georgia. He’s one of 13 active Division I players with 1500 career points and 700 career rebounds, and the only member of that club who has yet to finish his junior season.

If it’s close late, count on the Govs. APSU’s 72.4 percent mark at the free-throw line ranks second in the league to begin Ohio Valley Conference play, while Southeast Missouri is seventh at 66.4 percent.

The Govs have now had seven different lineup combinations through 13 games, including each of the last four. They had just five different starter combinations in 33 games last season. The seven combinations are behind only Lipscomb and Loyola Marymount, who have each started eight different combinations, among Division I schools.

Taylor is one of 21 Division I players across the nation with a consecutive starts streak at 80 or more games.

No deep threat: Southeast Missouri ranks last in the league at 5.3 made three-pointers per game.

Freshman Carlos Paez [5] has a 3.5 assist-to-turnover ratio since joining the starting lineup three games ago.

A win would be Austin Peay State University’s…

For more information on joining the Governors in the Dunn Center this winter, to secure season tickets or to become involved with the Monocle Society, call 931.221.PEAY. You can also purchase tickets online at www.LetsGoPeay.com/buytickets; [7] be sure to access the new 360-degree view of the Dunn Center when purchasing tickets.

Check back at LetsGoPeay.com and on Austin Peay State University’s Official Athletics Facebook page often for up-to-date news about all Governor athletics, as well as the APSU Governor men’s basketball Twitter page (@AustinPeayMBB).

Live stats will be available during the game at PeayStats.com, and all home games and Ohio Valley Conference games can be viewed on the ESPN+ app.