Clarksville, TN – Trailing by double-digits in the fourth quarter, it looked as though the Austin Peay State University (APSU) women’s basketball might be able to mount its third comeback in as many games when they cut the Southeast Missouri lead to four with 5:37 left to play; but this time the Govs came up just short, falling, 79-66, in the Dunn Center. 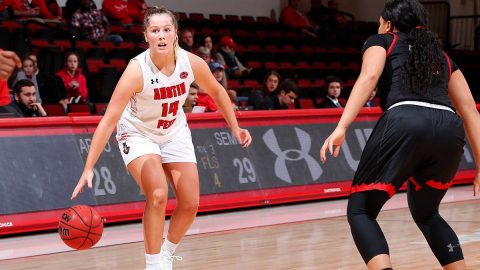 The Governors came out red-hot in the Ohio Valley Conference opener, knocking down three of their first four shots, and surging to an early 7-0 lead.

Other than a three-pointer from Kasey Kidwell [1] to start the game, the Govs did the majority of their first quarter damage in the paint – where they scored 14 of their 24 first-quarter points.

After the first ten minutes of action, the Governors held a five-point lead.

In the second quarter, the APSU Govs were unable to carry on their first-quarter momentum. The Governors turned the ball over seven times, and only managed to get off seven shots in the quarter, as the Redhawks erased the early deficit and took a 37-33 lead into the locker room.

Southeast Missouri continued its hot shooting in the second half, taking a 10-point lead before three-minutes expired in the third quarter. But these Governors can score in bunches, and it took them less than two-minutes to cut the deficit in half. However, the APSU Govs could never get closer than five in the third quarter, as Southeast Missouri went on a 10-5 to take a 10-point advantage into the final quarter.

Trailing by double-digits in the fourth quarter for the third consecutive game, the Govs had mounted comeback wins in each of their last two games. It looked like the Governors would be able to summon some of that fourth-quarter magic again when Arielle Gonzalez-Varner [2] scored seven consecutive points as the Govs to cut the deficit to four.

However, that was as close as the Governors would get in the final quarter, Southeast Missouri answering the Gonzalez-Varner run with a 12-3 run of their own. For the first time in three games, the Governors comeback effort came up just short, and they dropped their first OVC contest of the season.

Fast break points. The Redhawks outscored the Governors 18-5 on the fast break. In Austin Peay State University’s three losses this season, they have been outscored by an average of 18.3-3.7 in fast-break points.

On Southeast Missouri
“I thought they did a really good job on defense. When we drove the basketball, there was a second person there; and when we kicked it out, there was someone sitting there waiting on us. I thought we were hesitant on some shots, and for whatever reason I don’t think there was the same energy for our team as there has been.”

On dropping the OVC opener
“It’s not the end of the world. You get to play basketball each day, its’s great, there are many people that want to do this. It’s one game out of 18, its never awful, the sun is going to come up tomorrow whether we won or lost, and UT Martin is going to come in here on Saturday ready to play.”

Moving on to UT Martin
“We have got to play with more energy and the ball has to have energy. We have to move the ball better and play a little bit looser on offense. We can’t take seven shots in a quarter with the way we play, and we have to find a way to play with a little more energy.”

Ella Sawyer [4] led the Govs in scoring for the first time in her career, matching her career high with 16 points.

Arielle Gonzalez-Varner [2] scored in double-figures for the seventh time this season, and only missed her fifth double-double of the season by a single rebound.

For only the second time this season, the Austin Peay State University bench was outscored (27-26).

The Governors forced a season-low 13 turnovers.

The Austin Peay State University women’s basketball team will get right back into Ohio Valley Conference play at 1:30pm, Saturday, when UT Martin visits the Dunn Center. The Skyhawks opened OVC play when they went on the road to knock off Murray State, 89-64, Thursday.