Clarksville, TN – Starting Ohio Valley Conference play 1-0 has to feel pretty good for Austin Peay State University (APSU) men’s basketball team, which the Govs did for the third year in a row with Thursday’s 78-63 win against Southeast Missouri. 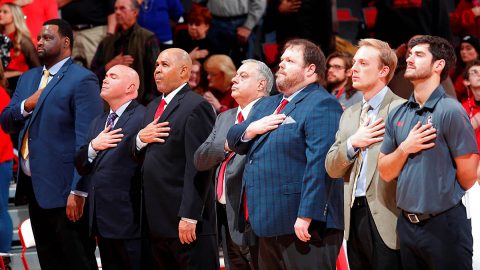 For the second game in a row, the Govs trotted out the same starting lineup; normally, that’s not notable but where Austin Peay State University and its recent injury troubles are concerned, being able to run with the same five that started at Georgia amounts to stabilization and continuity.

Right away the Govs set the pace, building an early 12-5 lead; while Southeast Missouri (4-10, 0-1 OVC) would get back within a bucket around the 12-minute mark,

APSU’s frenetic pace had the Redhawks on their heels defensively, as the Govs attacked time and again in 3-on-2 and 2-on-1 situations at their end of the court.

When the Govs settled into their half-court offense, it was clear Southeast Missouri’s chief objective was stop Terry Taylor [1] on the block at all costs. And give the Redhawks that much–they were successful in the first half, limiting Taylor to eight points on a pair of threes and a pair of free-throws.

But doubling Taylor has consequences, which manifested Thursday night in 17 first-half points by Jordyn Adams [2] and some wide-open shots for Govs on the perimeter as Taylor expertly passed out of the double-team.

At the 8:04 mark in the first half, the Govs led by five following a Sage Tolbert layup; when the buzzer sounded, Austin Peay State University (7-7, 1-0) took a 41-24 lead into the locker room thanks to a half-closing 14-2 run, with 10 points coming from Adams. Twenty minutes in, the Govs were firmly in control.

Fortunately, the Governors big lead and 48.1 percent (13-for-27) showing from the field helped APSU more than keep pace with the Redhawks over the final 20 minutes.

Taylor found more room to work in the second half; he equaled Adams with a game-high 22 points and pulled down 11 rebounds for his season’s fifth double-double. Freshman Carlos Paez [3] joined the high-scoring duo in double figures with 13 points.

The Govs controlled the glass to heretofore unseen levels in 2019-20.

Austin Peay State University’s plus-20 (41-21) rebounding margin was its second-largest this season, trailing only a plus-22 against Oakland City, and is its first plus-20 performance on the glass against a Division I foe since March 7th in the OVC Tournament quarterfinals against Morehead State.

It also marked the first time the Govs pulled down 40 or more rebounds since the Southeastern Louisiana game (November 23rd).

The Govs have now won six straight against the Redhawks.

The win is Austin Peay State University’s first this season when scoring fewer than 80 points.

Paez now has a 4.25-to-1 assist-to-turnover ratio in his four starts.

For the second game in a row, the APSU Govs committed a season-low 13 fouls.

After combining for 18 second-chance points the last three games against Duquesne, Alabama State and Georgia, the Govs had 18 against the Redhawks.

Adams scored his 200th career point in just his 14th appearance as a Governor.

The win is APSU’s ninth straight at home.

On the end of the first half
“The last eight minutes of the first half is the best we’ve played defensively this season. Our objective throughout the course of the year is to create havoc, make them play one-on-one basketball, challenge at the rim and rebound and I thought for the first half we did that.”

On momentum
“I told our guys, ‘Right now, you’re 1-0 and in first place. The objective now is to be 2-0 on the other side of the weekend.’ You always start each semester with an A, and it’s up to you if you lose the A or not.”


Next Up for APSU Men’s Basketball

Another quick turnaround awaits the APSU Men’s Basketball team, with UT Martin on the horizon Saturday afternoon. The Dunn Center doubleheader kicks off with the women’s contest at 1:30pm, with the men taking on the Skyhawks after.