Knoxville, TN – The Tennessee men’s basketball team returns to the hardwood for its SEC opener against LSU on Saturday afternoon inside Thompson-Boling Arena. Tipoff is slated for 12:00pm CT on ESPNU.

Saturday’s game can be seen on ESPNU, online through WatchESPN and on any mobile device through the ESPN App. Fans can access WatchESPN at espn.com/watch. Beth Mowins and Sean Parnham will have the call. 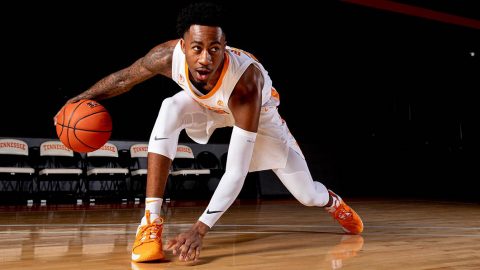 Last time out, the Vols fell to Wisconsin 68-48, dropping their second home contest in three tries. The bright spot for UT came from junior Jalen Johnson [2], who scored a career-high nine points and pulled in a career-high-tying six rebounds.

The Vols have won 15 of their last 20 conference openers and is 2-2 in conference lid lifters under head coach Rick Barnes [3]. A victory would leave Barnes just three wins shy of recording his 100th victory on Rocky Top and would increase UT’s SEC home win streak to 18 games.

Up next, Tennessee hits the road for its first SEC contest away from home, when it takes on Missouri on Tuesday night in Columbia. Tipoff is set for 7 p.m. ET on SEC Network.

The Vols hold a 31-17 edge when the series is contested in Knoxville and have won four of the last five meetings on Rocky Top.

Make the Vols 3-2 in SEC openers during the Barnes era.

Give Tennessee a victory its most recent regular-season meeting with every SEC opponent except for Auburn.

Third-year LSU head coach Will Wade is a Nashville native and graduate of Franklin Road Academy.

Wade got his footing in the collegiate coaching ranks as a student manager at Clemson under former Rick Barnes [3] assistant Larry Shyatt.

In 110 seasons of varsity basketball, Tennessee has had only one letterman from the state of Louisiana: forward Maurice Robertson (New Orleans) in 1996.

Tennessee has won its most recent regular-season meeting against 11 of 13 SEC opponents. Auburn and LSU are the only teams to hand the Vols a loss in their last regular-season clash.

Mid-year enrollee Santiago Vescovi [5] arrived in Knoxville on December 28th. The freshman guard is awaiting standard SEC and NCAA clearance protocols before he is eligible to compete.

Tennessee ranks second in the SEC in scoring defense, allowing only 58.1 ppg.

Junior John Fulkerson [6] is shooting a team-best .683 from the field while averaging a career-best 11.6 points per game this season.

Junior forward Yves Pons [7] has blocked at least one shot in every game this season and tied UT’s single-game record with six blocks against Jacksonville State.

True freshman Josiah-Jordan James [8] leads the Vols with 6.0 rebounds per game. He is the SEC’s second-leading rebounder among freshmen.

Senior guard and preseason All-SEC selection Lamonte Turner [9] announced on December 21st that he will no longer suit up for the Vols due to thoracic outlet syndrome.

Like Tennessee, LSU is coming off of an up-and-down non-conference slate that has seen it fall in two of its last three games. Before taking down undefeated Liberty on Sunday afternoon, LSU fell to East Tennessee State, 74-63, and USC, 70-68, in back-to-back games.

The 2018-19 edition of the Tigers had one of its best seasons in recent years, winning the SEC regular season championship with a 16-2 mark in conference action and advancing to its first NCAA Tournament since 2014-15.

Third-year head coach Will Wade looks to build off increased win totals in each of the last two seasons.

Through 12 games, forward Emmitt Williams has been a force down low. The sophomore from Fort Meyers, Florida, is second for the Tigers in points (13.9 ppg) and rebounds (7.5 rpg) and leads the team in blocks (1.3 bpg).

Senior guard and preseason All-SEC second-team selection Skylar Mays has impressed since taking on his new role as the conductor of the LSU offense. He currently leads the Tigers in scoring (15.8 ppg) and steals (2.3 spg), while averaging just under three assists per contest (2.8 apg), which ranks second on the team.

Both the Vols and Tigers come into Saturday’s game holding 8-4 records looking to gain an early spark as conference play gets underway.

In 1958 (seven years before the creation of Gatorade), LSU student-athletes were served Bengal Punch, a drink that is believed to have been the first sports drink ever created.

The Tigers were fueled by a raucous, sold-out crowd and the absence of All-SEC guard Tremont Waters, who was out due to illness.

Admiral Schofield [11] was the leading scorer for UT with 27 points and nine rebounds. Grant Williams [12] added 18 points, nine rebounds and three assists. Jordan Bone [13], also battling illness, had 13 points to round out the Vols’ double-digit scorers.

After going down by nine, LSU rattled off a 7-0 run to make it a one-possession game with 4:03 remaining.

A 3-pointer by Mays tied things up at 69-69 with 1:20 left. Mays then drew a blocking foul with 45 seconds remaining and converted both free throws to give LSU its first lead in the period. The Vols responded with a Williams layup with 33 seconds left.

The Tigers then drove to the basket with nine seconds left, but Kyle Alexander [14] blocked the shot out of bounds. The Tigers had four seconds on the shot clock and were forced to take a quick three that missed the mark. The Vols had a chance to get a shot up before the end of regulation but turned the ball over.

Williams converted an and-one to give UT a two-point lead. However, the Tigers got two offensive rebounds before finally tipping a shot back in to tie things up. Tennessee took a quick shot that was off the mark and then inadvertently fouled the Tigers. Smart went to the free-throw line and converted both free throws with 0.6 seconds left to seal the game.

Knoxville native Doug Roth blocked a school-record six shots vs. LSU on January 11th, 1989, lifting UT to a 100-96 win over the Tigers in Knoxville.

Anthony Richardson went 14-for-14 from the free-throw line, the best charity-stripe performance in school history, at LSU on January 12th, 1985. But the Vols fell that day by a score of 75-65.

Tennessee is 2-2 in SEC openers under Rick Barnes [3].

During his 17-year head coaching tenure at Texas, Barnes was 13-4 in conference openers, so he owns a 15-6 record to open league play over the last 21 years.

Tennessee was the SEC’s winningest program over the last two seasons (2017-18 and 2018-19)—both in terms of total victories and win percentage.

Given the status of senior guard Lamonté Turner, the arrival of mid-year enrollee Santiago Vescovi [5] is well timed.

Vescovi must await standard NCAA and SEC clearance protocols before becoming eligible to compete in games.

He faces a steep learning curve. Adjusting to college life is a challenge in itself—and the demands of playing the guard position for Rick Barnes [3] is equally as difficult, if not more so.

Yves Pons [7], the SEC’s second-leading shot-blocker, has blocked at least one shot in every game this season.

His streak of 12 straight games with at least one block is the longest such streak by a Vol since Wayne Chism authored a 14-game block streak as a senior in 2009-10.

Pons has blocked three or more shots in six games this season, highlighted by a program-record-tying six-block effort against Jacksonville State on December 21st.