Clarksville, TN – One weekend down, eight to go for the Austin Peay State University (APSU) men’s basketball in league play, with the Govs set to take on Tennessee Tech in a 6:00pm contest at the Eblen Center. 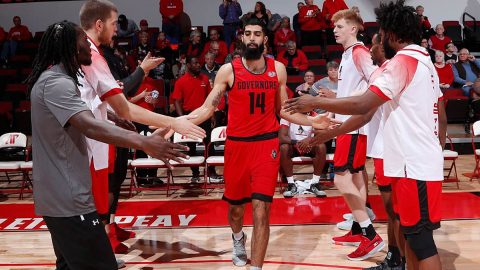 The Govs are one of four league programs who emerged unscathed after the first weekend of Ohio Valley Conference play; now, the Govs embark upon their longest OVC road swing of 2020, which takes them from Cookeville to Jacksonville, Alabama before making return visits to Southeast Missouri and UT Martin next weekend.

This contest renews one of the oldest and longest-running rivalries in the Volunteer State; it’s the most frequently-played rivalry in both program’s storied history. But this meeting is between two programs heading different directions.

In John Pelphrey’s first season, Tennessee Tech has just one victory against a Division I opponent, at Winthrop back in November. The Golden Eagles have lost their last six games, by an average of nearly 17 points, and have been one of least-efficient teams in the nation at the foul line–both by getting there (among the nation’s bottom-10 in free-throws shot and made) and what they do once they are there (64.1 percent at the stripe, 319th nationally).

While the Golden Eagles have recently shone signs of life, particularly Jr. Clay, Keishawn Davidson and Jared Sherfield since the start of league play, offense has been an Achilles’ Heel all season. The Golden Eagles have had single-game point totals of 30, 47, 39 and 54 points this season; removing the Martin Methodist (83 points) and Reinhardt (86) games, Tennessee Tech is averaging 59.3 points per contest.

The first half was a defensive struggle, while the second moved with pace. But in the end, Austin Peay toppled Tennessee Tech, 77-66, in Cookeville, January 31st, 2019, to earn its first win at the Eblen Center since  2009. Chris Porter-Bunton [1] opened the second half with six straight points, followed by eight straight from Terry Taylor [2] and a trio of threes from Zach Glotta [3] to spread the scoring wealth.

A win would give the Govs back-to-back wins against the Golden Eagles for the first time since 2007-09.

A win would be Austin Peay State University’s first true road win of 2019-20.

For more information on joining the Governors in the Dunn Center this winter, to secure season tickets or to become involved with the Monocle Society, call 931.221.PEAY. You can also purchase tickets online at www.LetsGoPeay.com/buytickets; [8] be sure to access the new 360-degree view of the Dunn Center when purchasing tickets.

Check back at LetsGoPeay.com and on Austin Peay State University’s Official Athletics Facebook page often for up-to-date news about all APSU Governor athletics, as well as the Governor men’s basketball Twitter page (@AustinPeayMBB). Live stats will be available during the game at PeayStats.com, and all home games and Ohio Valley Conference games can be viewed on the ESPN+ app.